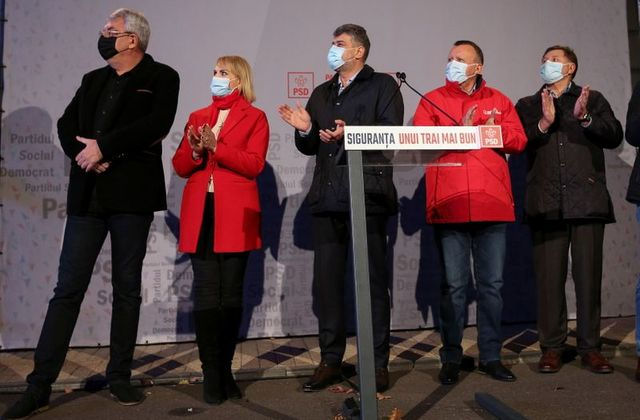 Romania’s opposition Social Democrats (PSD) have taken the lead in Sunday’s national election, seen as pivotal for the country’s future in the European mainstream, according to partial results on Monday, but are unlikely to form the next government.

The PSD, which rode a wave of voter discontent over the coronavirus pandemic and the minority Liberal government’s pledges of fiscal restraint, will struggle to form a functioning majority against incumbent Prime Minister Ludovic Orban.

President Klaus Iohannis, an ally of the Liberals who gets to nominate the prime minister, has said repeatedly that he will task Orban with forming a centre-right coalition government to rein in a ballooning budget deficit and restore the European Union state’s credibility among foreign investors.

Under Romanian law, the president is not obligated to pick a prime minister from the winning party if it did not secure an outright majority.

Orban himself claimed victory on Sunday evening after exit polls showed the outcome was too close to call, saying he was confident he could build a centre-right coalition government.

Partial results showed that the PSD had won just under 30% of votes for both houses of parliament, while the Liberals got 25-26%. The centrist alliance USR-Plus, a likely coalition partner for the Liberals, won 15-16% of votes.

Parliamentary seat redistributions will change the final percentages and favour the largest parties, but analysts said the Liberals and USR-Plus would probably need to co-opt at least one other grouping to gain a majority, raising the prospect of difficult negotiations over key portfolios and policies.

“It is a weak result for the Liberal Party,” said Sergiu Miscoiu, a professor of political science at Babes-Bolyai University. “The more parties it needs to form a coalition, the more complicated the compromises it will have to make.”

The next parliament looks set to have only five or six parties, including the ethnic Hungarian UDMR and the newcomer Alliance for Uniting Romanians (AUR), an ultra-nationalist group formed a year ago which won 9% of votes.

The populist PMP, founded by former president Traian Basescu, was waiting to see whether it had crossed the 5% threshold for entering parliament.

Leaders of the Liberals, USR-Plus and UDMR said on Sunday they favoured a centre-right coalition government, as did PMP. Most clearly ruled out negotiations with the Social Democrats.

The EU would welcome a government led by Orban, after years of efforts by a succession of PSD Romanian cabinets to suppress the independence of the courts – a charge they denied – that mirrored overhauls of the judiciary in Poland and Hungary.

Orban also campaigned on a promise to bring Romania closer to the EU mainstream following years of fiscal populism, political instability and neglect of rundown infrastructure and public services.

Turnout was the lowest since the 1989 fall of communism, with only one in three Romanians voting, with disappointment over failed reforms compounded by fears of coronavirus contagion in polling stations.