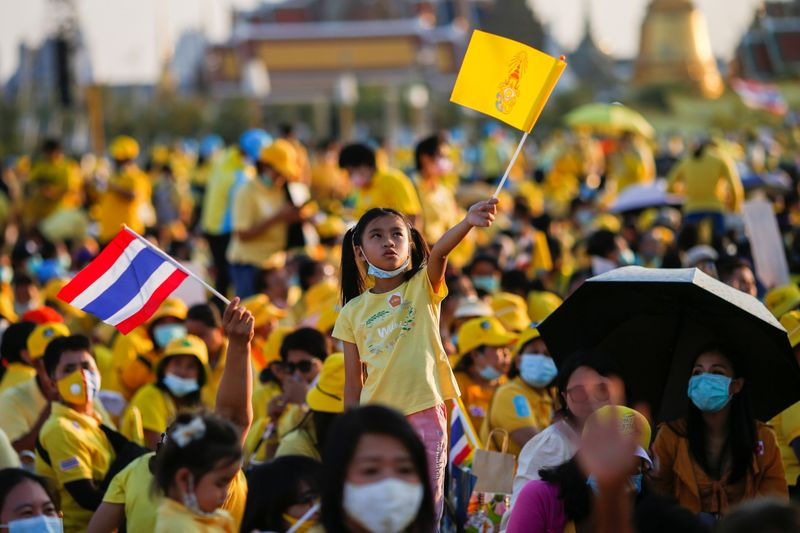 Thousands of people gathered in Bangkok on Saturday to show their devotion to the Thai monarchy on the birthday of King Maha Vajiralongkorn’s late father, after months of street protests led by a youth movement demanding reform to royal powers.

King Vajiralongkorn led a candle lighting ceremony in front of the Grand Palace in Bangkok to pay tribute to his father King Bhumibol Adulyadej, who died in 2016 after reigning for seven decades – during which he was seen by many as a symbol of national unity.

The king was joined by thousands of loyalists, wearing the royal colour yellow and waving national flags.

In recent months, the monarchy in Thailand has become a target for a youth-led protest movement that accuses the current king and the government led by a former army chief Prayuth Chan-ocha of expanding royal powers to a level not seen since the absolute monarchy ended in 1932.

The protesters broke long-standing taboos by openly criticizing King Vajiralongkorn for taking direct control of two military units and the wealth of the Crown Property Bureau, valued in tens of billions of dollars.

Saturday’s ceremony was one of the biggest shows of royalist support since protests surged in July.

“The king has always been there to take care of people’s happiness, and without the king there would be chaos,” Wanchote Kunprasert, 65 told Reuters

Another man who was holding a portrait of King Bhumibol said that the respect for the monarchy is deeply ingrained in Thai culture and dismissed the protests that call for its reform.

“The monarchy has been with us for centuries, how can you change that by just a few months of protests,” said Sirinan Jungwatmunee, 63.