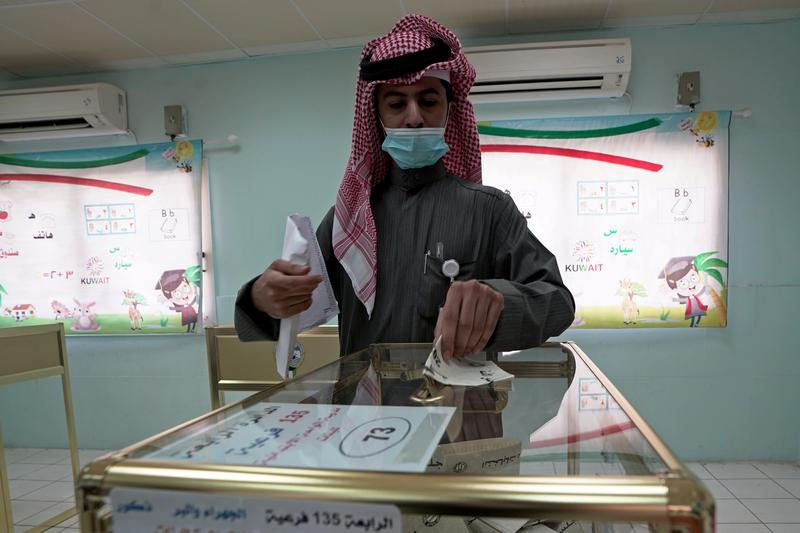 Kuwaitis voted in legislative polls on Saturday with the Gulf state mired in its worst economic crisis in decades, which poses a challenge for the government’s often stormy relationship with a parliament blamed for blocking reforms.

More than 300 candidates, including 29 women, are vying for 50 seats in the Gulf’s oldest and most outspoken assembly with legislative powers. Critics say it has stalled investment and economic and fiscal reform in the cradle-to-grave welfare state.

Campaigning, which took place mostly on social media and local TV channels due to COVID-19 restrictions, has focused on the economy, corruption and demographics in a country where foreigners make up the bulk of the workforce.

“Kuwait needs development. The streets are broken and there is no development and no economy … and coronavirus has affected everything in every way,” said Ibrahim, a government employee, after voting in Kuwait city.

Turnout is expected to be lower than in past elections due to concerns about COVID-19 which, along with low crude prices, has battered state finances in the wealthy oil-producing nation.

A low turnout could strengthen the hand of tribal, Islamist and other candidates who can rally supporters to head to polling centres, analysts said.

“Kuwaiti opposition who boycotted (previous) polls are moving to run and vote, and this could strengthen their presence,” said Kuwaiti political analyst Mohamad al-Dosayri.

Frequent clashes between the cabinet and the assembly have led to successive government reshuffles and dissolutions of parliament. Kuwait’s emir, who has the final say, picks a prime minister who selects a cabinet.

The current government is due to resign after the elections.

Sheikh Nawaf al-Ahmad al-Sabah took the reins as emir in September following the death of his brother.

Kuwait’s economy, which is worth nearly $140 billion, is facing a deficit of $46 billion this year. A government priority is to overcome legislative gridlock on a bill that would allow Kuwait to tap international debt markets.

Sheikh Nawaf has called for unity to face challenges at home and in a region experiencing heightened tension between Kuwait’s larger neighbours Saudi Arabia and Iran.

Under the old electoral system, voters were allowed to cast ballots for up to four candidates, which the opposition says allowed alliances that partly made up for the absence of political parties, which are officially barred.

The system introduced in 2012 allows votes for only a single candidate, which the opposition says makes alliances difficult.

At al-Waha School in Jahra City, a polling station for men, voters in Arab robes protected themselves with face masks and hand sanitizers before putting their votes into the ballot box.

About 20 female observers watched a male judge checking the identity of women voters at the Bahsira school for girls before they cast their ballots.

Kuwaiti opposition figures have proposed electoral reforms and a pardon for dissidents, many in self-exile.

“There have been some reforms in the judiciary and the Emiri Diwan,” or court, said a Kuwaiti politician who asked not to be named. “We heard echoes of more reforms after elections.”