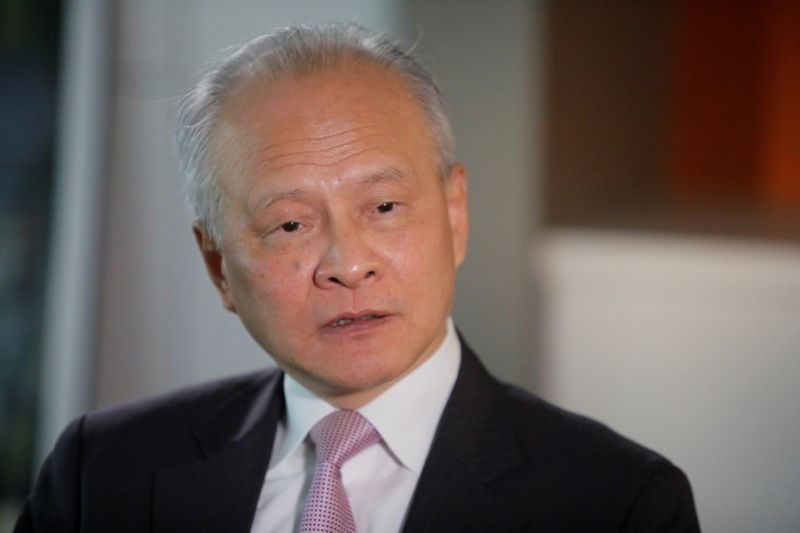 China and the United States need to proceed together with “good will” to improve relations, the Chinese ambassador to Washington said on Saturday, as ties remained fraught between the world’s two biggest economic powers.

Sino-U.S. relations have fallen to their lowest point in decades over issues from trade and security to human rights and COVID-19. On Friday, a Chinese state media editorial said ties are being shifted to “a dangerous path”.

“In order to put the relations on the right track, to have real improvement of the relations, both sides have to proceed with good will and good faith,” Ambassador Cui Tiankai told the Annual Conference of the Institute for China-America Studies via video link.

“I don’t think that China should just do something to please anybody here,” he said, according to a transcript posted on his embassy’s website.

Tensions between the two countries dramatically escalated in July when China closed the U.S. consulate in the southwestern city of Chengdu in retaliation for Beijing’s ouster from its consulate in Houston, Texas.

Earlier in the year, Washington cut the number of Chinese nationals allowed to work at the U.S. offices of major Chinese state media. Beijing then expelled U.S. journalists in the China bureaus of New York Times, Wall Street Journal and the Washington Post.

When asked by President of the National Committee on United States-China Relations Steve Orlins if China is prepared to reopen the Chengdu consulate among other positive gestures before President-elect Joe Biden takes office in January, Cui did not rule out the possibility.

“I have to say we did not initiate the closing of consulates. We were not the first one to ask foreign journalists to leave the country. We did all these things in response to actions taken by the United States. So if the U.S. government is ready to reverse the course, we are ready to look at it,” Cui said.

But, Orlins said, Beijing had unilaterally taken measures against U.S. interests, including the blocking of the three newspapers’ websites, as well as Facebook, Google, YouTube and Twitter, and that Washington had not responded to those actions.

“There were provocations. If you look at what happened in the past year or so,” Cui replied.

India fails to end deadlock with farmers, talks to resume next week