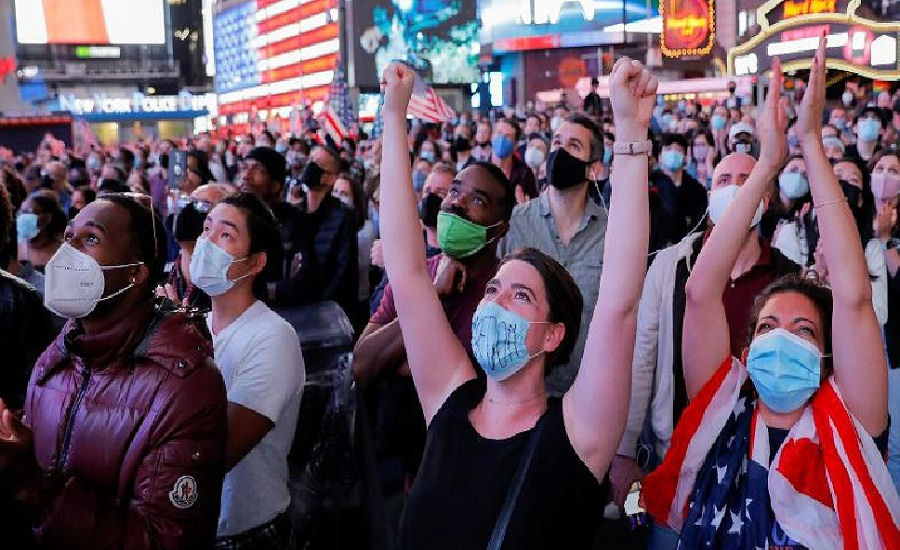 Days of pent-up post-election anxiety gave way to spontaneous street celebrations as Joe Biden supporters on Saturday cheered news of his presidential win with a cacophony of banging pots and pans, honking horns and dance music in cities across the United States.

Rallies by hundreds of supporters of Republican President Donald Trump, who insisted on Saturday “this election is far from over,” were more muted in size and scope compared with the festive crowds that turned out by the thousands in some cities for Biden.

While there were some isolated confrontations between Trump and Biden supporters, as occurred between two opposing groups of about 100 each in Harrisburg, Pennsylvania, there were no immediate reports of violence or other unruly behavior.

After a nerve-wracking four-day wait for results after polls closed on Tuesday, the reaction to news that Pennsylvania and its 20 Electoral College votes had carried Biden over the line was almost instantaneous.

Minutes after major television networks called the race in the former vice president’s favor, throngs of people – most wearing masks to curb the spread of COVID-19 – streamed to the White House to rejoice outside a security fence as the sound of fireworks boomed in the distance.

“I was on the bus and I jumped off the bus to come right down here to the White House,” Washington resident Donna Thomas said. “It is something to celebrate. We have been waiting so long.”

Duane Fitzhugh, 52, a teacher celebrating outside the Trump International Hotel, on Pennsylvania Avenue blocks from the White House, compared the moment to the lifting of an evil spell.

“It’s like a pall fell over the country four years ago, and we’ve been waiting years for it to end,” he said.

In New York City, Biden supporters danced in the streets, cheered and banged on kitchenware from balconies, brownstone stoops and rooftops – hoisting Biden campaign signs and American flags in the air.

A planned demonstration in Manhattan’s Columbus Circle turned into a dance party celebrating the election’s result, while revelers at Washington Square Park in Greenwich Village danced and splashed in the park’s fountain.

Similar scenes played out in cities coast to coast – Atlanta, New Orleans to San Francisco, among them – overwhelming what some backers of Trump had planned as a day of rallies in all 50 state capitals in support of baseless claims that Democrats were out to steal the election.

Hundreds of pro-Trump demonstrators gathered in several cities – from state capitals in several battleground states like Pennsylvania, Michigan and Arizona to such Republican strongholds as Colorado Springs, Colorado.

But those rallies were generally smaller in number and in size compared with the crowds turning out to register their delight at the victory of Biden and his running mate, Kamala Harris.

At least 2,000 people massed in San Francisco’s Castro District in a carnival-like atmosphere of dancing, shouting, and music blaring from car stereos.

Some hoisted painted paper-mache likeness of Trump with the words “lock him up” scrawled on it, along with Biden campaign signs and American and rainbow flags. Even a handful of city traffic control officers were seen joining in the revelry.

Many supporters of Trump and his running mate, Vice President Mike Pence, demonstrated their own unwillingness to accept the election’s outcome.

Hundreds gathered on the steps of the state capitol building in Lansing, Michigan, waving Trump-Pence flags to shouts of “This is not over” and “We will be here forever.”

At the Arizona State Capitol in Phoenix, tensions ran high as supporters of the president, some carrying firearms, chanted “Trump won” and “We will win in court.” They blamed news media outlets for declaring Biden the winner. “The media is part of the coup!” one shouted.