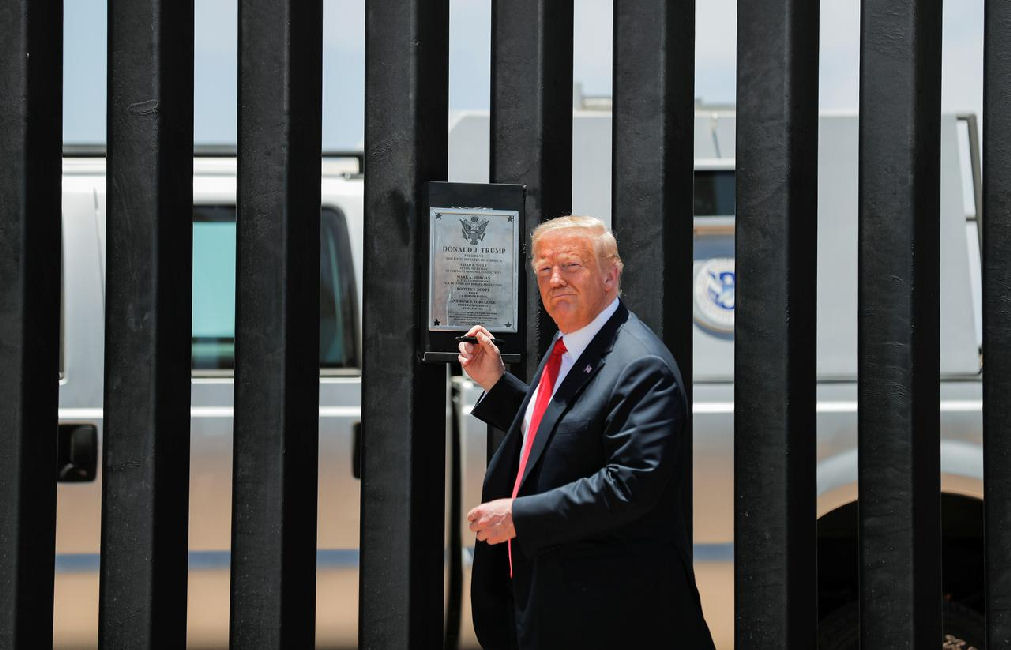 U.S President Donald Trump is powering ahead with his anti-immigration agenda, even as voters say they are more concerned with the coronavirus pandemic and the economic destruction it has wrought.

The Republican president won the White House in large part due to his hard-line stance on immigration, a bedrock issue that animates his base. His administration has maintained that focus despite intense pressure to respond to the world’s worst coronavirus outbreak and nationwide protests against police brutality and racism that have fueled a summer of discontent.

Trump has amplified new issues this election cycle, including law and order in the wake of the protests, and unsubstantiated claims that a surge of mail voting due to coronavirus concerns will lead to widespread fraud. Still, he has instituted sweeping new immigration policies during the pandemic and made it a campaign advertising priority on Facebook.

Recent policy changes include broad shutdowns of America’s legal immigration system, such as blocking the entry of a range of temporary foreign workers and some applicants for permanent residence. With Trump trailing in the polls, the White House is preparing further restrictions in the run-up to the Nov. 3 election, according to Stephen Miller, the architect of Trump’s immigration agenda.

In an interview with Reuters, Miller said Trump’s tough stance will contrast with that of his Democratic challenger Joe Biden. Permissive immigration policies, Miller claimed, will prove a “massive political vulnerability” in the coming election.

In a new television ad that launched on Tuesday in the early-voting battleground states of Arizona, Florida, Georgia, North Carolina and Wisconsin, the Trump campaign warned that Biden’s support for legalizing millions of immigrants living in the country illegally would subject American workers to more competition in a dismal job market.

The strategy has baffled some Republican strategists, who say the election will be decided mainly on bread and butter issues. Trump’s sagging fortunes are bound to the U.S. failure to tackle coronavirus, which has killed more Americans than World War One and caused the U.S. economy to contract at its steepest pace since the Great Depression.

Trump’s use of immigration to energize his core supporters and shift the conversation away from the crises facing the country could alienate swing voters, according to Alex Conant, a Republican strategist.

In an analysis conducted for Reuters, the Migration Policy Institute, a Washington-based think tank, said that before the pandemic, the administration was making immigration policy changes at a rate of about one every three days.

During the pandemic, this has increased to about one every two days, a tally that includes both significant changes to the immigration system and logistical moves, such as temporarily closing offices that process immigration applications.

“You would expect it to take a back seat to the massive public health and economic crises under COVID,” said Sarah Pierce, a policy analyst at the institute. “Instead the administration has been just as active on immigration as ever.”

White House and Trump campaign officials say they’re confident the president’s tough immigration stance is a winner. More actions are likely before the election, including finalized rules that would greatly limit access to asylum, and measures to help protect U.S. workers from competition with skilled foreigners entering the country on H-1B visas.

Those moves could sway some voters if they are framed around the pandemic and economic recovery, according to a new Reuters/Ipsos poll conducted July 31 to Aug. 4.

A majority of undecided voters generally had a positive view of immigration – except when tied to the pandemic. Some 53% favored stopping some legal immigration if it protects jobs for Americans during the COVID-19 crisis, the poll showed. Nearly half of undecided voters back a recent Trump policy to rapidly deport migrants, including unaccompanied children, which the administration claims was needed to stop the spread of the virus. As many as one in six registered voters have yet to decide between Trump and Biden, according to recent polling.

Ann Rone, a 49-year-old radiology technologist in Missouri, is an undecided voter who supports legal immigration but agrees that it should be paused during the pandemic to free up jobs for Americans.

“They may not be the best paying jobs, or what we want, but they’re jobs,” she said.

“Voters want a president who will protect American workers and our borders,” Murtaugh said. “And you do that by enforcing immigration laws.”

Ann Rone, a 49-year-old radiology technologist in Missouri, is an undecided voter who supports legal immigration but agrees that it should be paused during the pandemic to free up jobs for Americans.

“They may not be the best paying jobs, or what we want, but they’re jobs,” she said.

“Voters want a president who will protect American workers and our borders,” Murtaugh said. “And you do that by enforcing immigration laws.”

Trump made immigration a pillar of his first-term agenda, diverting billions in military funds to pay for a border wall with Mexico and greatly restricting refugee admissions and access to asylum.

“Build that wall” chants came to define his 2016 campaign, which attracted crowds at raucous rallies across the country. This election cycle, immigration is not as prevalent on his Twitter feed and at his news conferences, but it remains a constant theme and one of his biggest policy priorities.

Immigration is one policy area where Trump has the power to take action that results in relatively quick change, even if the moves are later challenged in court. Reviving an ailing economy is more complicated and mostly requires the support of Congress, where Democrats control the House of Representatives.

In recent months, the administration has reduced family-based immigration and effectively paused the diversity visa lottery, which awards some 55,000 visas annually to immigrants from countries with low rates of immigration to the United States.

The Trump campaign spent more on immigration-themed ads on Facebook than on any other policy area from April to June, according to an analysis by Bully Pulpit Interactive, a Democratic public opinion firm based in Washington. Facebook has more than 160 million voting-age users in the United States, according to the company.

The ads focused on the border wall and criticism of Biden’s support for a path to citizenship for an estimated 11 million immigrants who entered the country illegally or violated the terms of a visa.

If elected, Biden has also vowed to pause all deportations of people living and working in the United States illegally for 100 days after taking office, a stance he took in a March debate amid questions about millions of deportations during his time as vice president in the administration of former President Barack Obama. Biden said that after the 100-day pause, his administration would only deport felons.

Miller said such a move would spark “a run on the border, the likes of which this world has never seen before.”

Trump campaign officials have highlighted Biden’s planned moratorium, and the president criticized the idea in a July press conference in the White House Rose Garden.

“So in other words, we’ll take all of these people, many of whom are in prison for rape, murder (and) lots of other things,” Trump said.

A Biden campaign spokesman said the deportation moratorium would only apply to people already in the United States and would not encourage illegal crossings.

U.S. voters ranked immigration as a top issue in 2018 and early 2019, according to Reuters/Ipsos polls, but the issue lost traction with the broader electorate in the latter half of 2019 and into 2020. Even Republicans, who have rated immigration as an increasingly important concern in recent years, appear to have shifted focus since coronavirus slammed the country in March. Like other voters, they now rank the economy and healthcare as top concerns, according to the Reuters/Ipsos poll from July 31 to Aug. 4.

Whit Ayres, a Republican pollster, said Trump’s failure to pivot would make it harder for him to pick up new voters and gain ground on Biden, who has been leading in the polls for months.

“His message today is almost exactly what it was in 2016,” Ayres said. “The country has changed, but the president’s message has not.”