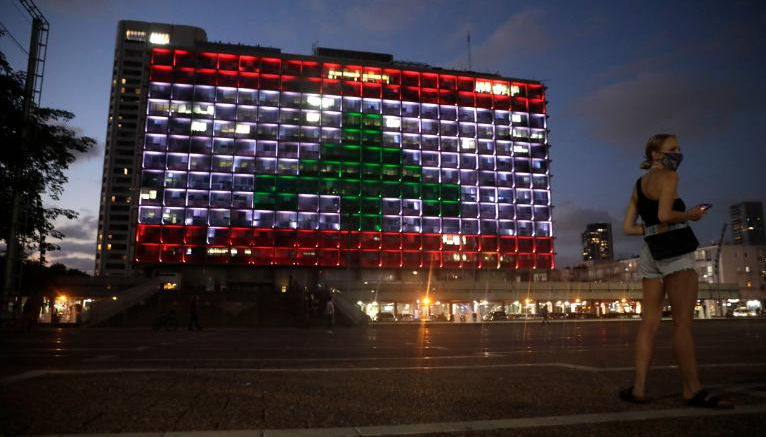 The city’s municipality building was lit up with an image of the Lebanese flag on Wednesday evening as a show of support for Beirut, which was heavily damaged by Tuesday’s blast.

“Humanity comes before any conflict, and our hearts are with the Lebanese people following this terrible disaster,” Tel Aviv Mayor Ron Huldai said in a statement.

It has become a tradition in Tel Aviv to use the large frontage of the building to demonstrate solidarity with a city or a country that has suffered misfortune, whether man-made or otherwise.

The show of support followed the massive explosion that rocked the Lebanese capital of Beirut on Tuesday evening, killing at least 135 people and injuring at least 5,000 more, according to the Lebanese Health Minister.

Dozens of people are still missing, and at least 300,000 people have been displaced as a result of the blast.

A large supply of confiscated and potentially unsecured explosive material that was stored in a warehouse at the city’s port is suspected as the source of the explosion. Prime Minister Hassan Diab said that 2,750 metric tons of ammonium nitrate has been stored at a warehouse in the port for six years.

“On behalf of the Israeli government, I send my condolences to the people of Lebanon,” Israel Prime Minister Benjamin Netanyahu said. “Yesterday, there was a very big disaster. We are prepared to extend humanitarian aid as human beings to human beings. As we did in the humanitarian crisis in Syria. This is our way.”

Tuesday evening, within hours of the explosion, Israel’s Defense and Foreign Ministers Benny Gantz and Gabi Ashkenazi jointly announced an offer to the Lebanese government for the provision of medical aid for the victims.

Some Israeli hospitals were also told to prepare for the possible arrival of UN personnel wounded in the explosion. So far there is no official word of whether the aid offer has been accepted.

Some in Israel have questioned these offers of assistance and shows of solidarity. Yair Netanyahu, the eldest son of the Prime Minister, gave his take on the decision of the Tel Aviv mayor to light up the municipality with the Lebanese flag by tweeting, “Displaying the flag of an enemy state is a criminal offense !!!!”

Israel considers Lebanon an enemy state and regards itself as in an ongoing armed conflict with Hezbollah, which, though technically holds only a limited role in Lebanon’s government, is nevertheless key to the Lebanese government’s survival.