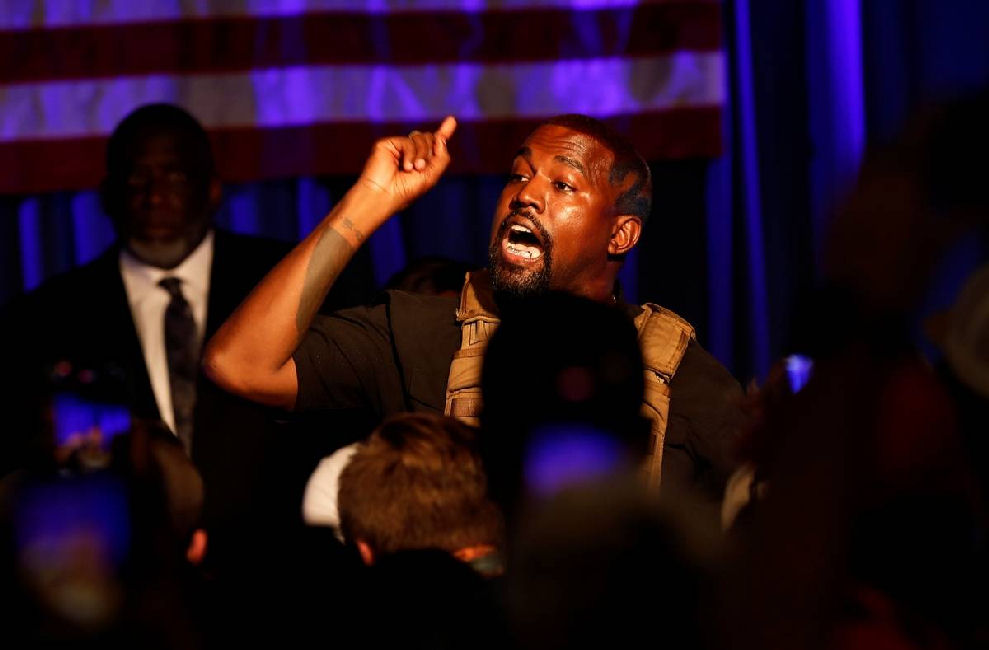 US rapper Kanye West’s chaotic launch of his unlikely campaign to oust Donald Trump in November’s presidential election has sparked anger, concern for his mental health and questions about whether he is seriously running.

Wearing a bullet-proof jacket marked “security,” West broke down in tears during a rambling speech in Charleston, South Carolina Sunday that was supposed to kickstart his White House bid.

For Jeffrey McCune, who teaches a course on West at Washington University in St. Louis, the topsy-turvy nature of the event was typical of the hip-hop star.

“All things Kanye are impulsive. I have never been a fan of ‘throw-your-towel-in’ political entries. However, this is Kanye’s brand completely,” he told AFP.

With “2020” shaved onto his head, West veered between several subjects during the hour-long rant, including claiming that he had wanted his wife, Kim Kardashian, to get an abortion.

But it was his comment that “Harriet Tubman never actually freed the slaves, she just had the slaves go work for other white people,” that grabbed most headlines.

“HARRIET TUBMAN FREED enslaved people. You, Mr West are a jerk and not worthy of uttering Tubman’s name. You have not freed anyone,” Larson wrote.

Tubman is known for helping free dozens of black people from slavery by using a network of activists and safe houses known as the Underground Railroad. She fought for the Union in the Civil War, as well.

West also told the event that he had wanted his wife to get an abortion when she was pregnant with North, their oldest daughter. He then revealed his father also had wanted to abort him.

“My dad wanted to abort me. My mom saved my life. There would’ve been no Kanye West because my dad was too busy,” West said, bursting into tears.

West’s speech, clips of which went viral on social media, provoked bewilderment, as well as concern for the musician, who has talked about his struggles with bipolar disorder.

The event also offered little insight into what policies he might put forward, although he did propose that “everybody that has a baby gets a million dollars.”

West has also talked about prison reform in the past.

The 43-year-old caused further confusion Monday night by posting a series of cryptic tweets, including one accusing his wife of trying to have him committed to a hospital.

“Kim was trying to fly to Wyoming with a doctor to lock me up like on the movie Get Out because I cried about saving my daughters life yesterday,” he wrote, referring to the 2017 thriller.

The tweets were later deleted.

West raised eyebrows on July 4 when he announced on Twitter he would challenge Trump.

He has offered virtually no details about his campaign, but the hip-hop star — who famously wore a “Make America Great Again” cap to a 2018 Oval Office meeting with Trump — said he no longer supports the president.

Reports began circulating in US media last week that West had dropped out of the race.

“Kanye West did not submit a petition,” a spokesperson for the state’s election commission told AFP.

Analysts are reluctant to write off West completely, aware that Trump’s run in 2016 wasn’t considered particularly serious until he won the Republican nomination.

They say West doesn’t have to win the race to influence it.

“Kanye’s personal resources and visibility and track record of generating media attention for himself, he could be the wild card in enough places to have an impact on the race, even if he only gets on the ballot in a few key states,” said Robert Yoon, an elections specialist at the University of Michigan.

McCune says that although he believes West has “many brilliant ideas,” he “will be a minor player in the field, if one at all.”

He describes West, who is due to release a new album this week, as “a performance artist” who may be viewing his run as another show.

“After all, Kanye being a provocateur in many ways has made him more profitable.”