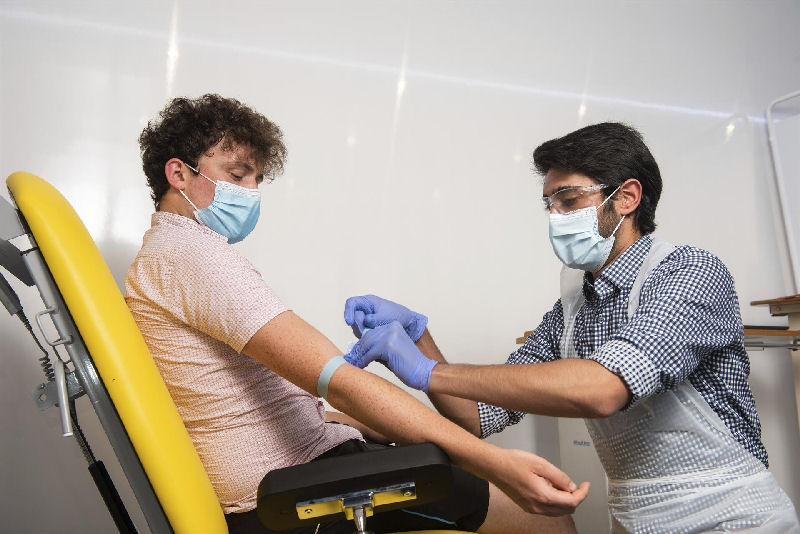 Two studies offered new hope of a potential vaccine for the novel coronavirus Monday, seven months after the disease was first identified in China and spread rapidly across the globe.

The positive news came as alarm grows over fresh outbreaks of the disease that has killed more than 600,000 people worldwide and battered economies with months of shutdowns meant to stop its spread.

Divided EU leaders struggled at a summit Monday to salvage a 750-billion-euro coronavirus aid package for their region, even as countries from Australia to France tightened restrictions to curb new outbreaks.

In a promising step towards a COVID-19 vaccine, one trial among more than 1,000 adults in Britain found that a vaccine induced “strong antibody and T cell immune responses” against the coronavirus.

Both studies, published in The Lancet medical journal, appear to show progress towards a vaccine that is effective and safe for widespread use.

“If our vaccine is effective it is a promising option as these types of vaccine can be manufactured at large scale,” said co-author Sarah Gilbert from the University of Oxford.

British biotech firm Synairgen also said Monday a randomized trial of an aerosol-based treatment shows it could drastically reduce the number of new coronavirus patients dying of the disease or requiring intensive care.

Europe has been the worst-hit continent by the pandemic with more than 200,000 deaths, but European Union leaders remained bitterly split Monday on how to help its worst-hit — and most indebted — members such as Italy and Spain.

Arriving for the EU summit in Brussels, France’s President Emmanuel Macron said he saw “the possible hopes of a compromise”.

“Nothing has been agreed yet, so I will remain extremely cautious,” he said.

A handful of EU countries led by the Netherlands are reluctant to hand over such vast sums — 750 billion euros ($860 billion) — to nations they regard as profligate, particularly Spain and Italy.

Many countries in the continent had largely brought their outbreaks under control and were considering further easing of restrictions before fresh clusters were detected.

Governments are struggling to balance public health concerns over spreading infections against the need to open up economies crippled by months of virus lockdowns.

France has made face masks compulsory in public indoor spaces, Spain asked millions to stay at home again, while the German state of Bavaria said it would soon offer free virus tests at airports.

Spain’s Catalan regional government has urged residents of Barcelona and its suburbs to leave their homes only for essential tasks in a bid to slow a new outbreak.

French authorities have reported 400 to 500 active outbreak clusters but there are no signs of an imminent “second wave,” Health Minister Olivier Veran said Monday.

“At this point, we are very far from a second wave,” Veran told Franceinfo radio, as face masks became mandatory in all enclosed public spaces including shops, covered markets and administrative buildings.

“The goal is not to worry people excessively, but to keep them on their guard.”

But an anti-mask demonstration in London Sunday highlighted the challenge still facing authorities and health experts despite the mounting COVID-19 toll.

Dozens gathered to protest the face mask requirement in England’s shops and supermarkets, many of them holding banners with widely discredited conspiracy theories — such as coronavirus prevention measures being used for “mind control”.

The United States — the worst-hit country in the world — has reported more than 60,000 new daily cases for six days.

With close to 3.8 million cases and more than 140,000 deaths, American authorities are struggling to contain the surge and US President Donald Trump has been criticized for his response to the crisis.

The devastation has left tens of millions jobless, and the poorest have been hit hardest by the economic downturn.

To help the less privileged and the homeless, one charity in Los Angeles has started a “community fridges” program.

It involves seven colourful, clean and well-stocked refrigerators for anyone to access.

“If you need to empty the fridge, no one will judge you. If you need to take one tomato, or you only put one tomato in there, do it,” said Marina Vergara, an organizer for LA Community Fridges.

Despite the vocal and stubborn opposition to lockdowns and face masks in some parts of the world, they remain among the few options for authorities to control new outbreaks in the absence of a vaccine.

There was grim evidence of how quickly the virus can spread over the weekend, with Iran’s president saying an estimated 25 million people in the country have already been infected.

While Hong Kong’s daily case count of 108 Sunday was far below other parts of the world, city authorities tightened distancing measures further, pointing to the fear of uncontrolled infections.