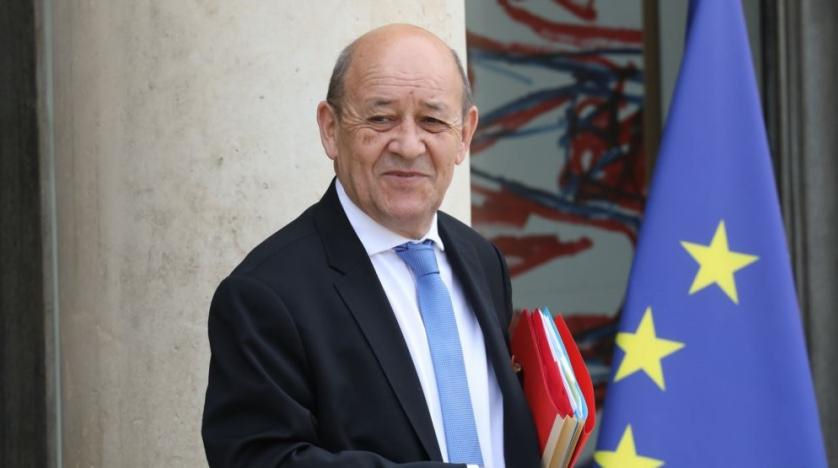 France Wednesday expressed alarm over the deepening economic and financial crisis in Lebanon, warning that social discontent could lead to an escalation in violence.

It also called on the Lebanese government to implement long-delayed economic reforms so that the international community could help the cash-strapped country out of its economic malaise.

“The situation is alarming, with an economic, financial, social and humanitarian crisis now reinforced by the risks of the coronavirus,” French Foreign Minister Jean-Yves Le Drian told a parliamentary hearing.

“The worsening social crisis … risks increasing the risk of violence,” he said, referring to recent sectarian tensions triggered by anti-government protests against the deteriorating economic and living conditions.

Le Drian said the government had to implement reforms so that the international community could help Lebanon and that he would head to Beirut soon to make that clear to authorities.

The French minister’s remarks come as Lebanon is facing an economic meltdown and has seen its national currency lose 80 percent of its value on the parallel market since last October, dramatically reducing the purchasing power of most Lebanese, and has put more than half the population under the poverty line.

Lebanon is currently negotiating with the International Monetary Fund on a $10 billion bailout package. But the negotiations have been stalled by disagreements between different interest groups representing Lebanese banks and Cabinet over the size of BDL’s losses. The government and the IMF in their negotiations have put these losses in the region of LL241 trillion, while Parliament’s Budget and Finance Committee places them closer to LL115 trillion.

Lebanon’s talks with the IMF are based on the government’s economic rescue plan, which calls for broad financial and structural reforms to cut the budget deficit, trim expenses, reduce waste, combat corruption, stimulate the sluggish economy and retrieve stolen public funds. The blueprint also calls for a restructuring of the soaring public debt, the shaken banking sector and the Central Bank.

Prime Minister Hassan Diab has said the government would ask for more than $10 billion from the IMF in the first phase of the loan plan. But the IMF and donor countries insist on the implementation of reforms before making any commitment to channel funds to help Lebanon.

“The international community has closed its doors to this government and I think this is a political decision,” Akar said in remarks carried by local media.

“They [international donors] have said they will support Lebanon after [implementation] of reforms. We will implement reforms and we will see if they will deliver,” she added.

Defending that Diab’s 20-member Cabinet, made up of specialists named by the Free Patriotic Movement, Hezbollah, the Amal Movement and their allies, Akar said: “This is a technocratic government and this is the first experiment of its kind. But decisions in Lebanon cannot be enforced without a political umbrella.”

Akar ruled out the possibility of the resignation of the government after it came under fire by the majority of the Lebanese and opposition groups for failing to deal with the crippling economic and financial crisis. “The government will not resign before we reach a stage where we cannot do anything,” she said.

The parliamentary Development and Liberation bloc headed by Parliament Speaker Nabih Berri called on the government to adopt Berri’s call for the declaration of “a state of financial and economic emergency to confront the catastrophic repercussions threatening Lebanon.”

The bloc, which met under Berri, discussed among other things the deteriorating economic conditions and the “horrible collapse” of the national currency against the U.S. dollar.

“The government is concerned with drawing up reform plans and must take, along with all political parties and parliamentary blocs, immediate measures to save Lebanon and prevent its slide toward total collapse,” a statement issued after the meeting said.

Meanwhile, the European Union commended Lebanon for hosting thousands of Syrian refugees, saying it was ready to work with a Lebanese government committed to carrying out structural reforms.

“The international community praised in the ministerial meeting of the Brussels IV Conference Lebanon’s extraordinary efforts to host the largest number of refugees per capita in the world. With the aim of meeting the increasing needs of the Lebanese people and Syrian refugees, the European Union stressed its readiness to work in a constructive manner with a government committed to implementing structural reforms and improving the system of governance,” the EU delegation in Lebanon said in a statement released Tuesday night at the end of the Brussels IV Conference. Titled “Supporting the future of Syria and the region,” the conference, which was held virtually, was hosted by the EU and the United Nations to assist war-affected people inside and outside Syria.

“The European Union stands on the side of Lebanon and its people in these difficult times and is committed to its unity, sovereignty, stability, political independence and territorial integrity,” said the statement, which was carried by the state-run National News Agency.

Lebanon hosts the highest number of refugees per capita in the world, at one stage with around 1.5 million Syrian refugees residing in Lebanon based on government estimates. According to Diab the cost of hosting Syrian refugees for Lebanon is currently estimated at over $40 billion.