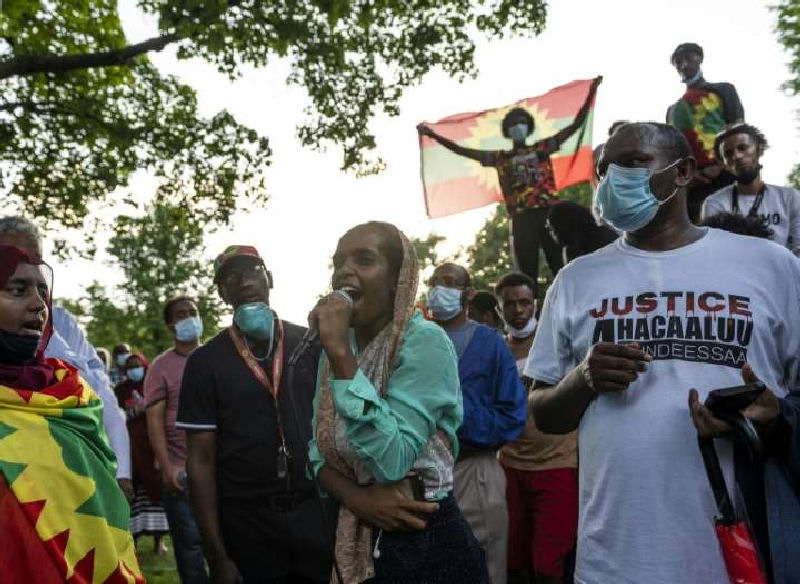 Two days of protests have left at least 81 people dead in Ethiopia, a police chief said Wednesday, after the murder of a popular singer from the country’s largest ethnic group stoked tensions that threaten to derail the country’s democratic transition.

Angry protests broke out in Addis Ababa and the region of Oromia which surrounds it, the heartland of the Oromo people who have long complained of oppression at the hands of smaller ethnic groups in the diverse country of 100 million people.

On Wednesday the worst violence took place in Hachalu’s hometown of Ambo, west of Addis Ababa.

At the core of the anger was Oromo nationalists’ desire to see Hachalu buried in Addis Ababa — historically at the heart of their territory, from where they feel they have been displaced.

It was a plan by the federal government to expand the capital into surrounding Oromia which kickstarted years of anti-government protests which swept Prime Minister Abiy Ahmed to power in 2018, as the first Oromo to hold the post.

Ambo spokesman Milkessa Beyene said that Hachalu’s body had arrived in the town for burial Thursday but “a group of youths who wanted the funeral to happen in Addis Ababa clashed with security forces, causing unrest.”

A former media mogul who recently entered politics, Jawar was arrested along with 34 other people for trying to intercept Hachalu’s body and return it to the capital, federal police commissioner Endeshaw Tassew said in a statement late Tuesday.

In the town of Holeta, west of Addis Ababa, security forces opened fire on demonstrators demanding Jawar’s release, said Teshome Bongase, a representative of the opposition Oromo Federalist Congress, of which Jawar is a member.

“The protesters were saying that Jawar is not a thief, he just wants Hachalu’s body to be buried with respect. This is their culture, that is what they are asking for,” said Teshome.

In October, reports that the government was attempting to remove Jawar’s security detail kicked off days of ethnic violence that left more than 80 people dead.

Jawar was initially supportive of Abiy, however like many Oromo nationalists has grown more critical of the prime minister, who is accused of not sufficiently advocating for the group’s interests.

The internet remained cut off for a second day in a government bid to curb the unrest.

He said there were “fatalities”, including Hachalu’s uncle.

Oromia police chief Ararsa said “there was a grenade attack on the family home of Hachalu Hundessa in Ambo. That grenade attack killed his uncle and injured two police officers.”

He urged the public to be calm ahead of the funeral.

In Addis Ababa young people gathered in groups with sticks trying to prevent Oromo nationalists from entering the city, and armoured military vehicles were seen on the streets of the capital.

Security forces fired into the air to disperse demonstrators who were approaching a statue of Emperor Menelik II, widely seen as the creator of modern-day Ethiopia.

Oromo nationalists see Menelik as a driving force behind their perceived marginalisation and for pushing them out of Addis Ababa, and Hachalu called last month for the statue to be pulled down.

Ethiopia has battled deadly intercommunal tensions in recent years, a major threat to efforts by Abiy to bring about democratic reforms in a country long ruled with an iron fist from Addis Ababa.

“The assassination of an important Oromo musician, subsequent protests which have in places involved property destruction and security forces using lethal force, and the arrest of Oromo leaders, creates a dangerous situation and is another blow to Ethiopia’s troubled transition,” said William Davison, an analyst with the International Crisis Group.