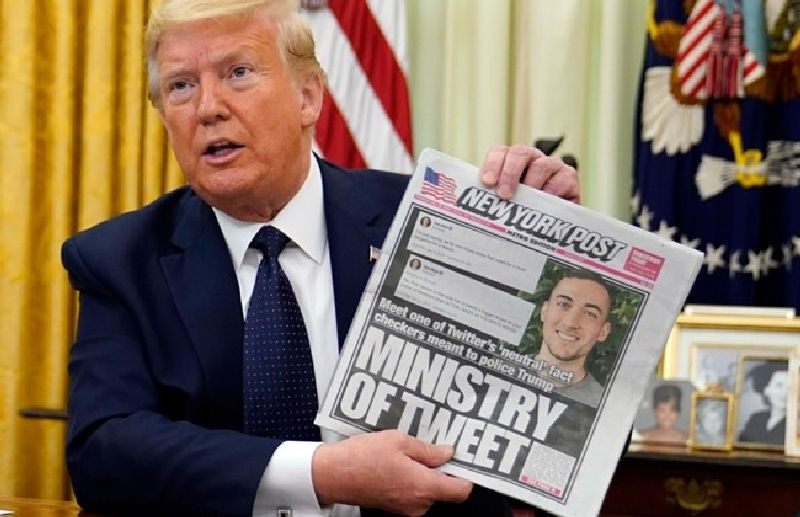 The White House thumbed its nose at Twitter Friday by reposting a President Donald Trump tweet that the social media giant had just taken the unprecedented step of hiding, because it violated the platform’s rules against “glorifying violence.”

The tit-for-tat marked a new escalation in the row between Twitter and Trump, who has more than 80 million followers and uses tweets daily to announce policies, attack opponents and comment on breaking news.

Twitter concluded that Trump fell afoul of its policies with a late-night tweet on violent anti-police protests in Minneapolis, when he called protesters “THUGS” and warned of military intervention.

In response, the official White House account called Twitter’s bluff by retweeting the same post. This time, Twitter responded by saying that while it violated its rules, the company “determined that it may be in the public’s interest for the Tweet to remain accessible.”

The White House later defended Trump’s tweet, saying, “The President did not glorify violence. He clearly condemned it.”

And Trump’s social media director and Twitter feed manager, Dan Scavino, had his own response.

“Twitter is full of shit — more and more people are beginning to get it,” he wrote on Twitter.

The latest spat came a day after Trump signed an executive order in the Oval Office seeking to transform the way social media companies are regulated. That followed Trump’s fury over Twitter tagging two of his tweets with fact checks, which was also an unprecedented measure.

Trump claims that the platform, where he dwarfs the presence of his Democratic rival Joe Biden for the November presidential election, is biased against him.

One immediate result of the blow-up between the social media-savvy president and the high-profile company has been to knock the coronavirus pandemic and recently reached toll of 100,000 dead Americans out of the headlines.

It also ties in with one of Trump’s major reelection themes: that despite being a billionaire White House incumbent with a Republican majority in the Senate, he is an outsider fighting a left-wing establishment.

Trump’s executive order seeks to remove social media platforms’ decades-long freedom from liability for content posted. Instead of being allowed to self-regulate, this would treat the companies more like traditional publishers, open to government regulation and court challenges over false or harmful material.

Trump told reporters at the White House he acted because big tech firms “have had unchecked power to censor, restrict, edit, shape, hide, alter any form of communication between private citizens or large public audiences.”

“We can’t let this continue to happen,” Trump said.

Ironically, his order could spur companies like Twitter to impose stricter lines for users, eventually curbing social media firebrands like Trump himself, who regularly goes online to insult people and support conspiracy theories.

How much will change in the near term is unclear, given the legal and political challenges facing Trump’s move.

Critics say Trump has no authority to regulate private internet operators or change the law, known as Section 230, which backers say has allowed online platforms like Facebook and Twitter to flourish.

Eric Goldman, director of the High-Tech Law Institute at Santa Clara University, said the order was “more about political theater than about changing the law.”

The order “is not legally supportable — it flies in the face of more than 900 court decisions,” Goldman said.