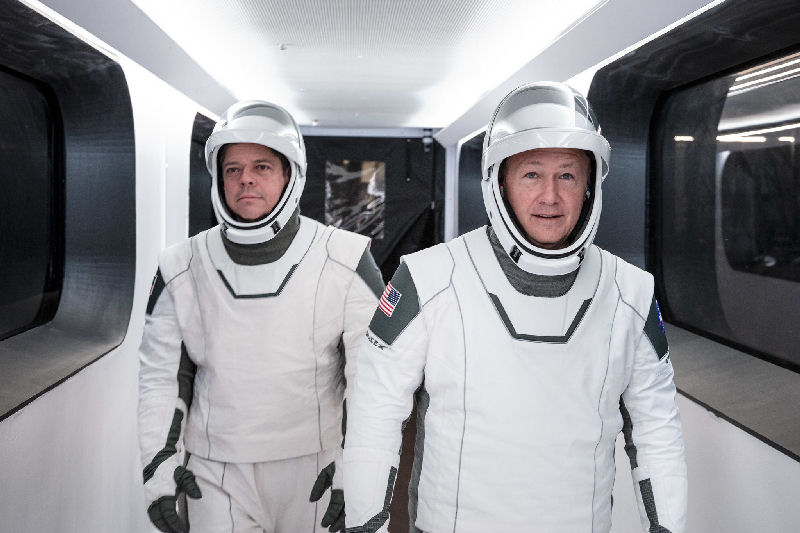 Elon Musk’s company SpaceX is about to launch its space vehicle – the Crew Dragon – with astronauts onboard for the first time. Here, we answer some common questions about the mission.

Why is a private company launching NASA astronauts?

NASA has been planning to hand over the transport of crew to the International Space Station (ISS) since the early 2000s. After the Columbia space shuttle broke up during its return to Earth in 2003, the space agency focused on developing a replacement spaceship that could travel to the Moon.

Involving private firms in the transfer of crew and cargo to the ISS was a necessary step to afford that program. In 2014, entrepreneur Elon Musk’s company SpaceX and aerospace giant Boeing were announced as winners of a NASA contract for crew transport services. SpaceX is launching its spacecraft first; the Crew Dragon spacecraft will lift off on Wednesday atop a Falcon 9 rocket from Florida’s Kennedy Space Center.

SpaceX is an American company that provides commercial and government launch services on its Falcon 9 and Falcon Heavy rockets. Entrepreneur Elon Musk founded the company in 2002, with the goal of reducing space transportation costs, enabling the colonization of Mars.

SpaceX was the first private company to routinely return rocket stages to Earth under propulsive power so they could be re-flown rather than being discarded. It has been conducting regular flights of cargo to the ISS, and will now aim to begin launching astronauts. Musk’s company is also developing a bigger spacecraft to carry humans – called Starship – which could begin the process of settling Mars.

Who is Elon Musk?

Born in South Africa, Elon Musk made more than $160m from the sale of online payment service PayPal to eBay. His desire to see humanity become a true space-faring civilization was a driving factor behind the founding of SpaceX. But he has also been involved in founding a variety of other companies such as the electric car manufacturer Tesla.

He also conceived a project called Hyperloop, a high-speed transportation system using pods that travel through a system of tubes. His colorful personality and lifestyle made him the inspiration for Robert Downey Jr’s interpretation of Marvel Comics character Tony Stark. Musk is no stranger to controversy: his tweets have triggered lawsuits and led to him being forced out as the chairman of Tesla (though he remained as CEO).

Why is the launch so important?

Since the retirement of the space shuttle in 2011, NASA has been paying Russia tens of millions of dollars to launch its astronauts on the Soyuz spacecraft. The Crew Dragon launch from Florida marks the first launch of humans from US soil in nine years. As such, it is seen as crucial for restoring American prestige in human spaceflight. This will also be the first time a private company has launched astronauts into orbit.

What is the Crew Dragon?

The Crew Dragon is the spacecraft that will transport astronauts to the ISS on Wednesday. It is a sleek evolution of the Dragon spacecraft which was built to ferry cargo to the orbiting outpost. The Crew Dragon is designed to carry a maximum of seven passengers, but NASA flights will carry four, with the rest of the space taken up by supplies.

It is equipped with thrusters that enable it to manoeuvre in space and will dock – or attach – to the space station under autonomous control. Unlike previous spacecraft designed for humans, the crew cabin features touchscreen controls in place of physical buttons.

Who are the astronauts flying to space?

Bob Behnken and Doug Hurley are NASA astronauts. They were selected in 2000 and have each flown to space twice on the space shuttle. They are among the most experienced members of NASA’s astronaut corps and both trained as test pilots – which has been critical for putting the new spacecraft through its paces. Hurley has spent a total of 28 days and 11 hours in space, while Behnken has accumulated a total of 29 days and 12 hours, including 37 hours of spacewalking time. Both men are also married to astronauts.

What are the astronauts there to do?

Spacecraft designed to carry astronauts have to go through a process that ensures they can operate safely. This launch is essentially the final step in that validation process. Once in orbit, Behnken and Hurley will test the Crew Dragon’s environmental control system, the displays and controls and the manoeuvring thrusters.

They will monitor the autonomous docking system during the approach to the space station and will become members of the ISS crew. At the orbiting outpost, they will continue performing tests on the Crew Dragon along with other tasks related to the space station. When it’s time to return to Earth, the Crew Dragon will parachute down into the Atlantic Ocean. The capsule and crew will then be recovered by a ship called Go Navigator.

What if something goes wrong during the launch?

The Crew Dragon has a built-in abort system, designed to save the lives of its crew in the event of an emergency. If there’s a problem during lift-off, such as a rocket engine cut-off, the Crew Dragon will fire engines to propel the vehicle and its occupants free of the rocket. The capsule will then parachute down to safety. SpaceX successfully conducted a test of its in-flight abort system on 19 January 2020.

What about those spacesuits?

The flight suits that Behnken and Hurley will wear in the capsule look very different to previous designs. In stark contrast to the bulky pumpkin-colored suits and round helmets familiar from the space shuttle era, SpaceX’s suits are slimline, white, one-piece numbers with sleek, 3D-printed helmets. Each one is custom made for the astronaut.

If they look like something from a science fiction movie, that’s probably because their look was devised by Hollywood costume designer Jose Fernandez, who has worked on the Batman, X-Men and Thor movies. But the suits also have to be practical; they’re designed to keep the crew alive in the event of a cabin depressurization – where the air is lost from the inside of the spacecraft.

If the Crew Dragon Demo-2 mission is successful, SpaceX will proceed with the six “operational” missions to the ISS they are required to fly under their $2.6bn contract with Nasa. Boeing holds a similar deal, worth $4.2bn, to transport crew to the space station using its CST-100 Starliner vehicle.