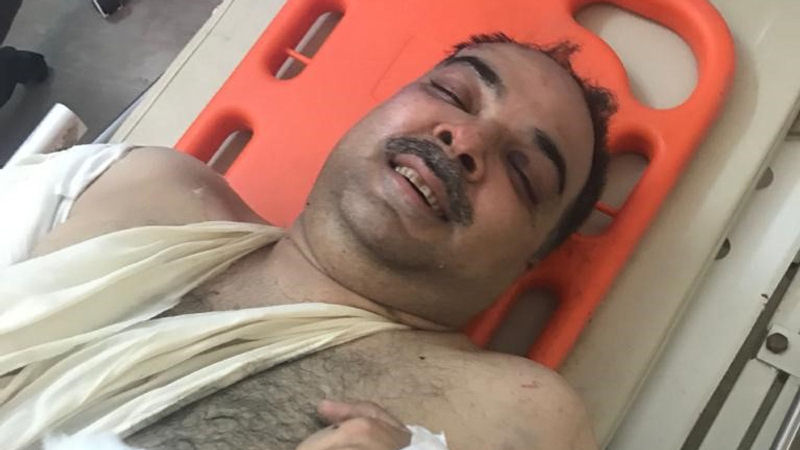 At least two people have survived after a Pakistan International Airlines (PIA) plane crashed in Karachi with 98 people on board.

Flight PK 8303 from Lahore crashed into a residential area of Karachi on Friday as the Airbus A320 plane, carrying 91 passengers and seven crew, was approaching Jinnah International Airport.

The airline said the pilot had reported technical issues and witnesses said the aircraft attempted to land two or three times before hitting a mobile tower and crashing into houses in the Model Colony area, a few miles away from the airport.

Smoke billowed from the scene where caved-in roofs could be seen as debris lay scattered in the streets while ambulances hurried through chaotic crowds, with fears residents are injured or dead.

Local TV stations showed footage of a man on a stretcher who they said was a survivor.

A senior Pakistani government source told Sky News one of the survivors is the president of Punjab Bank.

Footage given to Sky News showed a man believed to be Zafar Masud, who was in seat 1C, being pulled out of the wreckage as it was engulfed by flames.

Provincial government spokesman Abdur Rashid Channa said a banker had survived and spoke to officials from his hospital bed.

“Thank you so much. God has been merciful,” the passenger said, according to a government statement.

The other person who survived the crash has been named as Muhammad Zubair.

A total of 17 dead bodies and six injured people were brought into the nearby Jinnah Hospital, Seemin Jamali, its executive director said.

“The last we heard from the pilot was that he had some technical problem,” PIA spokesman Abdullah H Khan said in a video statement. “It is a very tragic incident.”

The pilot sent a Mayday and told controllers the aircraft had lost power from both its engines on its second attempt to land, according to a recording posted online by liveatc.net, which has released aircraft recordings in the past.

After the aircraft reportedly called off an earlier attempt to land and went around for a second attempt, a controller radioed the pilot to say he appeared to be turning left, suggesting he was off-course.

The pilot replied, “We are returning back, sir, we have lost engines,” and the controller cleared the plane to land on either of the airport’s two runways.

Twelve seconds later the pilot called “Mayday, Mayday, Mayday” and was again cleared to use either runway. There was no further communication from the aircraft.

It is feared there may be more casualties as the Model Colony area where the plane came down is densely populated.

Mayor Wasim Akhtar said at least five or six houses were destroyed in the crash.

A spokesman for Pakistan’s Armed Forces tweeted that helicopters were being used in the search and rescue effort and paramilitary troops had reached the site, alongside civil administration.

Footage taken from the scene showed a woman crying as she was helped to safety by another woman and one man being helped by a passer-by as he limped through the cordon.

Firefighters and other rescue workers were pictured on the roofs of buildings spraying water on to the wreckage of the plane.

The flight typically takes an hour and a half to travel from the northeastern city of Lahore to Karachi.

Airworthiness documents showed the plane, which first flew in 2004, last received a government check on 1 November, 2019.

PIA’s chief engineer signed a separate certificate on 28 April saying all maintenance had been conducted on the plane and that “the aircraft is fully airworthy and meets all the safety standards”.

It had been flown six times since returning to service after being grounded by the coronavirus lockdown.

Airbus did not immediately respond to a request for comment on the crash.

Pakistan resumed domestic flights earlier this week ahead of the Eid holiday marking the end of the Islamic fasting month of Ramadan.

It has been in a countrywide lockdown since mid-March to try to stem the spread of coronavirus.

In 2016, 47 people died when a PIA jet crashed into a mountainside in Khyber-Pakhtunkhwa province, whiel the country’s worst plane disaster happened in 2010 when an AirBlue flight crashed near Islamabad, killing 152 people.