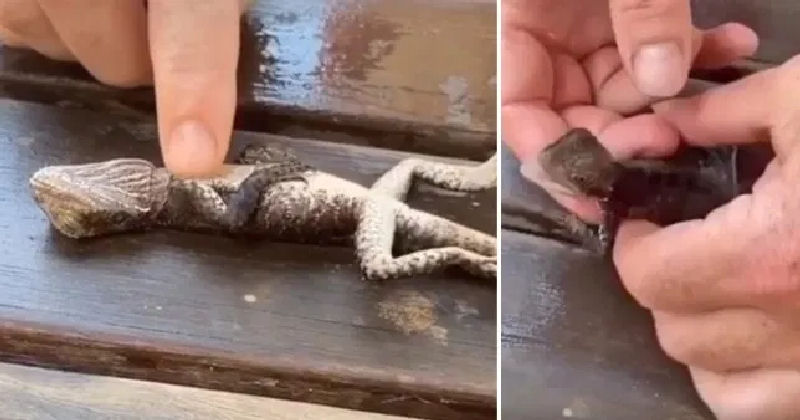 A lizard was brought back to life by an off-duty firefighter who successfully revived it with CPR. The reptile was found drowning in a swimming pool in New South Wales, Australia, as temperatures topped 34°C.

It is believed the lizard may have been attempting to climb out of the pool when it fell into the skimmer box – which is used to drag floating debris like leaves from the water’s surface.

Thankfully the off-duty firefighter, who has not been named, managed to find the animal and bring it back to life.

The creature has since been named ‘Lucky’. Posting a video of the first aid response to Facebook, Fire and Rescue NSW Station 037 Gordon said: ‘On Saturday one our off-duty firefighters was asked to attend a neighborhood pool where a drowning had occurred.

‘Upon arriving at the scene, a youngster was laying unconscious and not breathing after being found unresponsive in a pool skimmer box by some children after failing to “scale” from the pool.’ The firefighter administered CPR to the lizard using one finger for more than 10 minutes before it reacted.

Firefighters said: ‘Things weren’t looking good for the little fella but, soon after, an occasional “gasping breath” was noticed. ‘From previous experience our firefighters know this is not the time to stop so CPR was continued. ‘Then, miraculously, “Lucky” the lizard started to breathe on his own.’ The lizard eventually rolled back onto its stomach and ‘within half an hour, with a little sunshine, was back to chasing insects’.