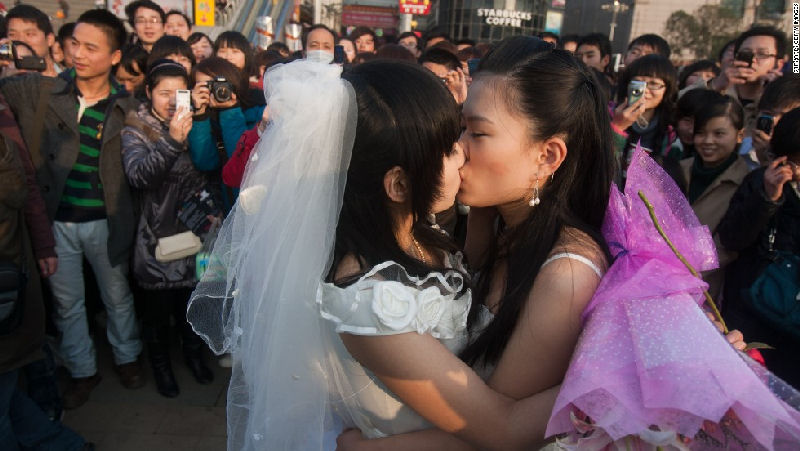 A Chinese lesbian couple’s landmark court battle over the custody of their two children has stirred debate over LGBT rights and put a spotlight on a legal vacuum created by the absence of a same-sex marriage law.

Shanghai resident Zhang Peiyi split up with her partner last year. The partner has since broken off communication and taken their two toddlers away to an unknown location.

So Zhang has turned to the courts, filing a case in the eastern province of Zhejiang this month, to fight for custody of one of the children, the one she gave birth to, and visitation rights to the other.

A court has accepted the case but hearings have yet to begin.

“Even if I can find them, I won’t be able to see them,” Zhang told Reuters. “I thought who else can help me? I could only find a lawyer.”

The case is the first of its kind in China and has attracted media attention. It is likely to be complicated by the fact that Zhang and her partner are women and not legally married, at least not in China, where marriage is defined as a union between a man and a woman.

More LGBT couples are choosing to have families but many find themselves pushing up against the limits of the law if the relationship ends, said Yang Yi, a programme officer at LGBT Rights Advocacy China.

“There are more than 100 assistive reproductive companies that target gay couples,” said Yang.

Yang said there have been custody battles between same-sex couples before but they were settled out of court.

Zhang and her former partner had their children with the help of reproductive technology in the United States. Zhang’s partner provided the eggs for the embryos and then each of them carried a separate embryo to full term.

While they were there, they also got married. However, that is not recognized in China, nor is there an existing law for Zhang’s claim over the children.

The court will have to decide whether Zhang can claim custodial rights or is it only her partner who provided the egg and therefore has the genetic connection.

Another question is whether an LGBT parent can claim custodial rights over a child who they raised but may not have any biological relationship to, as is the case with Zhang’s other child, whom her partner carried to term.

“I can’t say whether I support gay people … but I support this opportunity to give them their legitimate rights and interests,” said one social media user.

For Zhang, the key is the legalization of same-sex marriage.

“The focal point is how can you determine who is a child’s mother. But if you consider that there are two mothers, then it will return to the issue of same-sex marriage,” she said.

Zhang supports a campaign for the legalization of same-sex marriage. Though the prospect of the legislation looks slim, she said she won’t give up.

“You may feel like it wouldn’t happen very quickly, but that doesn’t mean we shouldn’t do anything,” Zhang said.