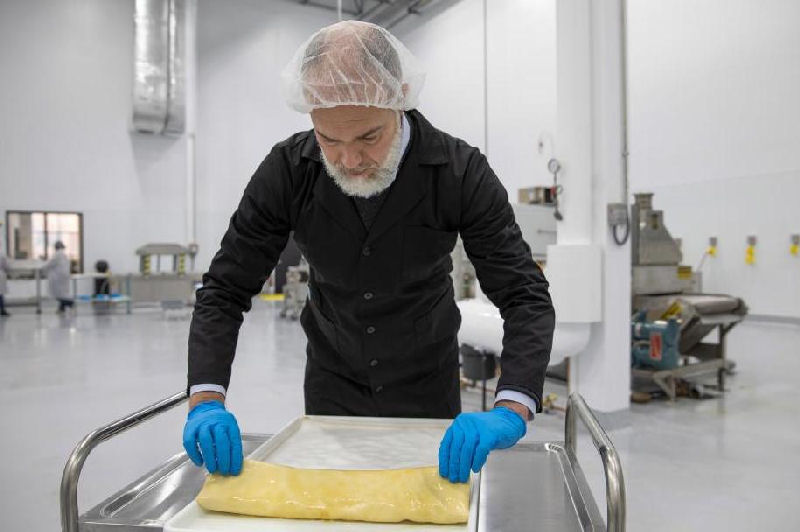 Food scientists are using fermented microbes from the geothermal pools above the Yellowstone Caldera in Wyoming to create a new ingredient that soon will appear in meatless burgers and substitute dairy and as a protein powder.

The microbe, dubbed Fy, contains a complete protein that developers believe can be mass-produced in labs, reducing the environmental impact of food production on a large scale.

Unlike other alternative-protein products, Fy is a food all by itself and not a protein additive combined with other processed ingredients.

Fy is produced by fermentation, like sourdough bread or kombucha, by feeding sugar to the microbes on tray-based fermenting chambers.

The result is a textured material with a bland taste that holds flavors from sweet to savory, said Jonas, a former French air force officer.

Working with food developers, the company has experimented with meatless burgers, patties and sausages, as well as dairy-free cheese, dips and yogurt, according to the company.

Nature’s Fynd opened its food-grade processing facility in in March and plans to release its first products this year. The firm has 50 employees with plans to double that number. The company also plans to provide the ingredient to other food processors, Jonas said.

Jonas said he sees the product as the “next stage” in the 11,000-year history of human domestication of animals and plants.

Along with creating meat-free burgers and dairy products, Jonas believes Fy could be an inexpensive way to produce inexpensive protein for large populations in Asia.

“The technology is portable,” Jonas said. “We could go to China or India if we want and source local sugar streams.”

The microbe that creates Fy is among the many mysterious organisms, called extremophiles, that live in the 10,000 brightly colored thermal areas in Yellowstone National Park. Pools bubble up from fissures in the lava above Yellowstone’s underground supervolcano.

Extreme heat above 450 degrees F, acidity or alkalinity and leaching minerals create a hostile environment in which unique microorganisms have evolved.

“These microbes come from a very extreme environment and are very efficient at using water and resources,” Jonas said.

The company has a profit-sharing agreement with the national park for use of biological materials collected there, Jonas said. Nature’s Fynd, formerly called Sustainable Bio Products, has a research and development lab in Bozeman, Mont., about 90 miles from the park.

Other Yellowstone microbiology researchers have been following the company’s experiments with creating food from hot springs microbes.

The oranges, browns, yellows, violets and greens found in the Yellowstone hot springs are all microbes, “in a sort of layered lasagna reflecting sunlight from those layers of different things living at different depths,” said environmental microbiology engineering professor John Spear at the Colorado School of Mines, who is not connected with the company.

“This fusarium is a microbial fungus, and some fungi are amazingly closely related to animals, with a similar physiology,” Spear said. “What’s cool about it is it contains all the things needed for our own lives, a complete protein,” Spear said.

For 20 years, the U.K.-based company Quorn has been fermenting a different fungi, fusarium venenatum, to create a “mycoprotein” that is the basis for burger patties and chicken and ground beef substitutes, according to the company’s website.

“Animals are not the healthiest way to get protein,” Simon said. “We can easily get protein from plant sources.”

Meat and dairy protein substitutes racked up $5 billion in grocery store sales last year, according to a March study commissioned by the Good Food Institute and the plant-based trade organization.

Plant-based dairy products grew 5 percent in 2019, with sales reaching $2 billion, according to the study, conducted by market research firm SPINS. Plant-based meat, especially when marketed in the refrigerated meat cases of grocery stores, grew by 63 percent over the past year, the study said, reaching $939 million in retail sales.

What parents should do if they get COVID-19