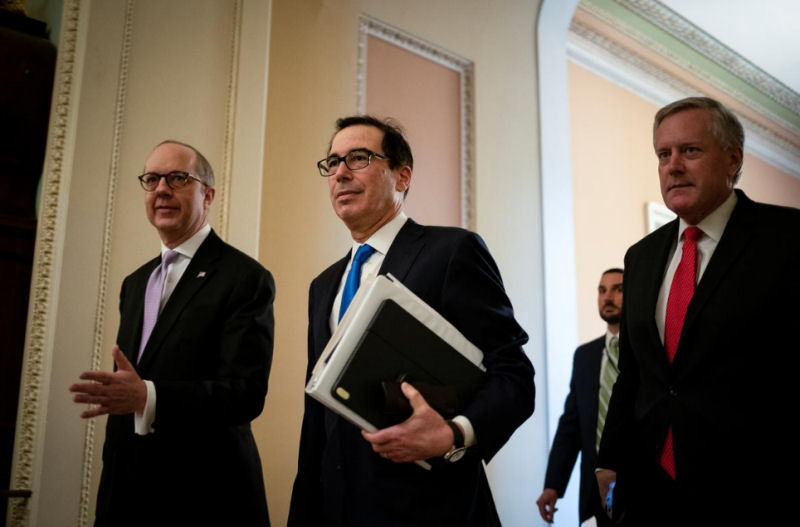 Senior Democrats and Republicans in the divided U.S. Congress said on Tuesday they were close to a deal on a $2 trillion stimulus package to limit the coronavirus pandemic’s economic toll, but it was unclear when they would be ready to vote on a bill.

“We are very close,” Senate Majority Leader Mitch McConnell said, as the chamber opened its session on Tuesday morning.

The Republican-led chamber’s top Democrat, Chuck Schumer, said on the Senate floor that “of the few outstanding issues I don’t see any that can’t be overcome within the next few hours.”

The $2 trillion package includes a proposed $500 billion fund to help hard-hit industries and a comparable amount to send direct payments of up to $3,000 to millions of U.S. families, as well as $350 billion for small-business loans, $250 billion for expanded unemployment aid and at least $75 billion for hospitals.

It aims to stem the heavy economic impact of a pandemic that has killed more than 660 people in the United States and sickened more than 50,000, shuttered thousands of businesses, thrown millions out of work and led state governors to order about 100 million people – nearly a third of the nation’s population – to stay at home.

A few issues, such as assistance to states, remained unresolved as of early afternoon, according to a senior administration official who spoke on condition of anonymity. It was unclear when the Senate would be able to vote on the deal.

House of Representatives Speaker Nancy Pelosi, the top Democrat in Congress, said the sides had agreed to more oversight provisions for the proposed $500 billion to help hard-hit industries, resolving a key sticking point.

The latest version would increase unemployment benefits by up to $600 per week, ensuring that many who lose their jobs would not see a drop in income, according to a Democratic aide. Jobless benefits currently pay workers a fraction of their salaries.

The bill calls for an inspector general and a bipartisan congressional panel to monitor the industrial aid, sources said.

Treasury Secretary Steven Mnuchin would have to tell lawmakers about what companies were tapping the aid, according to the administration official. Companies would face restrictions on stock buybacks and executive pay.

Lawmakers were also nearing an agreement to include $32 billion in grants to passenger and cargo airlines, sources said. They would have to choose between accepting grants or loans but could not receive both.

Democrats have twice blocked attempts to advance the bill, saying it did not provide enough money for states and hospitals, lacked sufficient aid for unemployed Americans and did not include adequate supervision of a massive fund to aid big businesses.

Wall Street bounced from three-year lows on Tuesday on hopes the Senate might be close to ending its standoff.

President Donald Trump, seeking re-election on Nov. 3, has said he may try to restart the economy more quickly by easing a public-health clampdown that aims to slow the spread of the virus. State officials have warned that step could mean more deaths.

Republicans, Democrats and top Trump aides have negotiated for days over the package, which would be the third and by far largest passed to address the crisis if it is backed by the Senate and the Democratic-led House and signed by the Republican president.

Pelosi said on MSNBC that the House could unanimously pass the legislation once it clears the Senate, but might also try to change it. This would lead to further delays and possibly require that chamber to return to Washington.

“We have some additions that we think would be very helpful to America’s workers,” she said.

The money at stake in the stimulus legislation amounts to more than what the U.S. government spends on national defense, scientific research, highway construction and other discretionary programs.

“Congress must approve the deal, without all of the nonsense, today. The longer it takes, the harder it will be to start up our economy,” Trump wrote on Twitter on Tuesday.

Pelosi has introduced her own $2.5 trillion counterproposal that also includes $4 billion to allow states to conduct the November presidential and congressional elections by mail. Multiple states postponed their presidential nominating primaries due to the pandemic.

Pelosi’s legislation would likely be irrelevant if a bipartisan deal is forged in the Senate.

Republicans normally hold a slim 53-47 majority in the Senate, meaning they need Democratic support to garner the 60 votes required to advance most legislation.

But the coronavirus has affected their ranks, giving Democrats more leverage. Republican Senator Rand Paul has tested positive for the coronavirus and four other Republicans are also unable to vote because they were exposed to Paul or others with the virus.