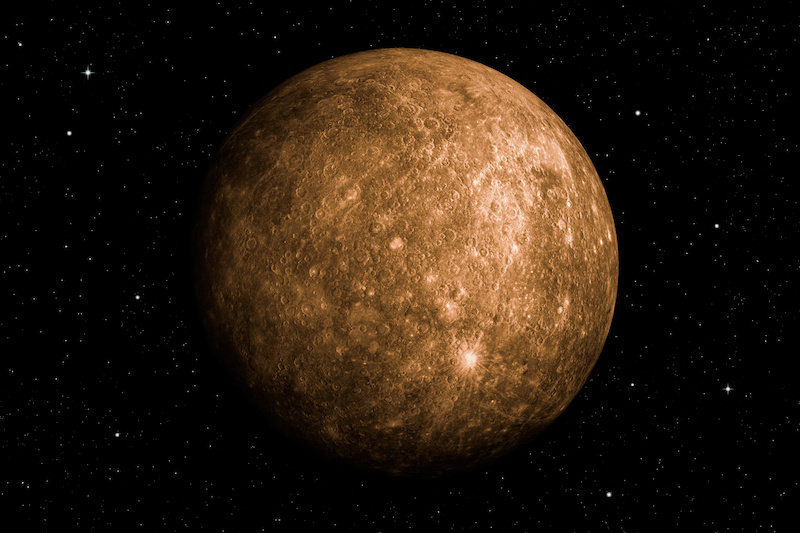 It is already hard to believe that there is ice on Mercury, where daytime temperatures reach 400 degrees Celsius, or 750 degrees Fahrenheit. Now an upcoming study says that the Vulcan heat on the planet closest to the sun likely helps make some of that ice.

As with Earth, asteroids delivered most of Mercury’s water, the scientific consensus holds. But the extreme daytime heat could be combining with the minus 200-degree Celsius cold in nooks of polar craters that never see sunlight to act as a gigantic ice-making chemistry lab, say researchers at the Georgia Institute of Technology.

The chemistry is not too complicated. But the new study models it onto complex conditions on Mercury, including solar winds that pelt the planet with charged particles, many of which are protons key to that chemistry. The model presents a feasible path for water to arise and collect as ice on a planet rife with all the necessary components.

“This is not some strange, out of left field idea. The basic chemical mechanism has been observed dozens of times in studies since the late 1960s,” said Brant Jones, a researcher in Georgia Tech’s School of Chemistry and Biochemistry and the paper’s first author. “But that was on well-defined surfaces. Applying that chemistry to complicated surfaces like those on a planet is groundbreaking research.”

Minerals in Mercury’s surface soil contain what are called hydroxyl groups (OH), which are generated mainly by the protons. In the model, the extreme heat helps to free up the hydroxyl groups then energizes them to smash into each other to produce water molecules and hydrogen that lift off from the surface and drift around the planet.

Some water molecules are broken down by sunlight or rise far above the planet’s surface, but other molecules land near Mercury’s poles in permanent shadows of craters that shield the ice from the sun. Mercury does not have an atmosphere and thus no air that would conduct heat, so the molecules become a part of the permanent glacial ice housed in the shadows.

“It’s a little like the song Hotel California. The water molecules can check in to the shadows but they can never leave,” said Thomas Orlando, a professor in Georgia Tech’s School of Chemistry and Biochemistry and the study’s principal investigator. Orlando co-founded the Georgia Tech Center for Space Technology and Research.

The researchers will publish their results in Astrophysical Journal Letters on Monday, March 16, 2020. The research was funded by the NASA Solar System Exploration Research Virtual Institute (SSERVI) program and the NASA Planetary Atmospheres program.

In 2011, a NASA probe began orbiting Mercury and confirmed signals typical of glacial ice near the poles. The MESSENGER (MErcury Surface, Space ENvironment, GEochemistry, and Ranging) spacecraft sent back images and data that corroborated previous signatures for ice picked up years earlier by Earth-based radar.

The ice was dingy and lurked in permanent shadows in polar craters on Mercury, which is pocked by meteorite and asteroid scars much like Earth’s moon. In fact, similarities between the two orbs, including their sizes, have led to many comparisons, including the probability of water ice on both.

Humans have found faint signs of possible ice on the moon but have found ice with near absolute certainty and in comparative abundance on Mercury. That has triggered some head-scratching: If asteroids, comets, and meteorites pummeled Mercury and the moon with water, what accounts for the difference in ice present? Did Mercury receive some water in a way that wouldn’t work on the moon?

“The process in our model would not be anywhere near as productive on the moon. For one, there’s not enough heat to significantly activate the chemistry,” Jones said.

In a separate project, Orlando’s lab is engineering a system based on the same chemistry to create water on the moon for future astronaut stations to be located there.

Protons from solar winds are more plentiful on Mercury than on Earth, where a mighty magnetic field whips solar wind particles, including protons, back out into space. Mercury’s field is only about 1 percent as strong, and it swirls protons down onto the surface.

“These are like big magnetic tornados, and they cause huge proton migrations across most of the surface of Mercury over time,” Orlando said.

The protons implant themselves into the soil all over the planet about 10 nanometers deep, forming in the minerals the hydroxyl groups (OH), which diffuse to the surface, where the heat does the rest.

“I would concede that plenty of the water on Mercury was delivered by impacting asteroids,” Jones said. “But there’s also the question of where asteroids laden with water got that water. Processes like these could have helped make it.”

“A comet or asteroid actually doesn’t need to carry water because the collision alone with a planet or moon can also make water,” Orlando said. “Mercury and the moon are always being hit by small meteoroids, so this is happening all the time.”

Materials provided by Georgia Institute of Technology. Original written by Ben Brumfield. Note: Content may be edited for style and length.