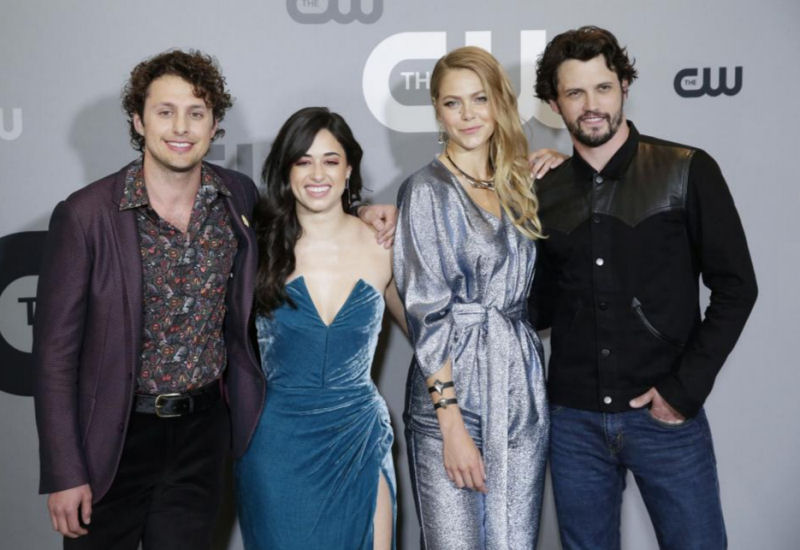 Nathan Dean Parsons has confirmed his alien character, Max Evans, will appear in Season 2 of Roswell, New Mexico, even though he died a hero at the end of the sci-fi drama’s first season.

“As we did with Season 1, we still have flashbacks, so I am still around to sort of fill out everyone else’s story. It’s a big change. It’s not easy to bring someone back from the dead when you don’t have superpowers.”

At the center of the quirky mystery-romance — which kicks off its second season Monday on The CW — are sheriff’s deputy Max, town scamp Michael Guerin (Michael Vlamis) and socialite Isobel Evans (Lily Cowles.)

Though they appear human, they actually are aliens with supernatural abilities whose spaceship crashed in the New Mexico desert in 1947 when they were children.

Fifty years later, they emerged from their travel pods the same age.

Max and Isobel were adopted by caring humans and raised as siblings, while Michael was placed in various abusive homes in the foster care system. They keep their origins secret for fear of being scooped up by the military and experimented on by scientists.

“In the beginning of Season 1, our catalyst is Liz gets shot and Max is able to repair her and now Max is very much in need of repair and Liz is a mere human and her science is incredible and she is brilliant, for sure, but she isn’t set up to do something that is so immediate for him,” said Mason.

“The frustration of her hands has been fun for me to play with. She’s in her lab. She’s doing her work, but these just don’t work as quick as his,” she added, indicating her own, non-magical fingers.

Season 2 also will show Liz spending time with her rebellious sister, Rosa, who was seen primarily in flashback in the first season. Liz and Rosa’s estranged mother, talked about but never seen in Season 1, returns to Roswell this season, too.

“It’s been this new dynamic for Liz, in the gratitude, the unbelievableness of having someone that you lost 10 years ago and that had such a massive effect on her,” Mason said about Rosa.

“It changed her persona. She was 17 when she lost Rosa. Liz is jaded, she’s guarded, her abandonment issues are high — all the walls that Max had to break down in Season 1. There are also complications having your once older sister, who is now 10 years younger than you, back.”

Because of the extraordinary circumstances surrounding Rosa’s resurrection, she has to be reintroduced slowly and quietly to those who knew her.

“She’s pretty much on lock-down and she’s not a character who enjoys that, who has ever responded well to parental restrictions or authority, in general. It’s another thing Liz has to navigate while trying to do the impossible,” Mason said.

Her crusade to revive Max forces Liz to team up with the willful and damaged Isobel and Michael, who love Max as much as she does, but aren’t easy to work with.

“It does very much feel like the Scooby gang. It’s all hands on deck. Everyone is trying to save his ass,” Mason said. “We’ve had a lot of days where it is a lot of us on set, which is so fun.”

Parsons and Mason missed working with each other in the early part of Season 2.

“We’re a team and we lead the show together,” Mason said.

“Last year, we were very much together in every scene,” Parsons said. “We were able to build a working dynamic that we just fell into. You just immediately know what the other person is going to bring. It’s hard to establish entirely new rhythms with people that you don’t work with just off the bat.”

The actor teased that he has a lot of free time while his co-stars’ characters work feverishly to bring Max back.

“I’m an extra sometimes. I’ll help the grips. Whenever they need something moved, I’m like, ‘Well, alright, I’ve got nothing else to do,'” Parsons laughed. “I’m learning a lot from our best boy grips and head electricians.”

Shiri Appleby, who played Liz in an incarnation of Roswell that aired 1999-2001, directed several episodes of the remake’s second season.

“She just loves this property so much,” Mason said. “I don’t think we could find someone for whom it means as much and it is as close to heart as it is with her. For as long as we go, she’ll be around, I think. Everybody loves her.”

Parsons added: “You know when you put this property in her hands that it is going to be taken care of. She’s going to honor the original and bring a whole nuance to it, and you can really just give your trust to what she wants to do. That’s a blessing.”

Appleby knows how to balance the unique elements of the “cowboys and aliens” show, which routinely deals with serious, timely issues such as immigration, racism, homophobia, addiction, life, death, love and loss.

“There’s a lot of big, heavy stuff, so when we find those moments of levity or ridiculousness, it’s fun to have a director who is like, ‘How can we lean into the pressure-release valve of this little baby scene right here?'” Mason said.

Season 2 will also delve more into the alien spacecraft crash of 1947 and how the U.S. government has covered it up, the show’s writer-producers said. More will be revealed about the parents of Max, Michael and Isobel, as well.