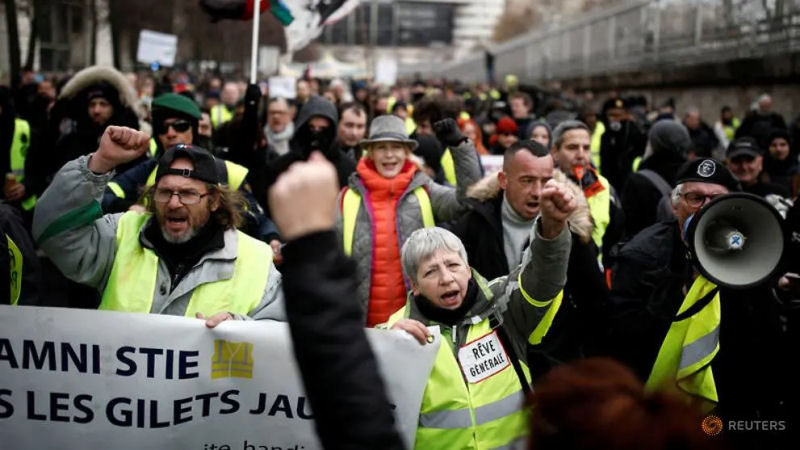 Thousands of French security forces fanned out across central Paris on Saturday as anti-government “Yellow Vest” protesters defied a ban on mass gatherings aimed at preventing the spread of coronavirus.

In a televised address to the nation on Thursday, President Emmanuel Macron announced school closures and urged people to avoid close contact for fear of propagating the virus that has killed 79 people in France and infected more than 3,600.

Interior Minister Christophe Castaner on Friday said all gatherings with more than 100 people had been banned. Paris police had already turned down requests for protesters to demonstrate at sensitive sites this Saturday, including the Champs Elysees where violent clashes broke out between security forces and protesters almost a year ago to the day.

“It’s Saturday, demonstration day. Some people think that the coronavirus won’t touch them and refuse to respect the advice,” said a riot police officer in front of a heavily armed vehicle blocking the road that leads to the presidential palace.

The government published an official decree on Saturday banning all non-essential gatherings, but hundreds of protesters, some wearing protective masks, began convening outside the Montparnasse train station, chanting anti-Macron slogans.

The yellow vests, named after the high-visibility jackets they wear, were holding a 70th consecutive Saturday of action. The movement emerged late in 2018, triggered by fuel tax rises, and swelled into a revolt against Macron’s government.

While protests are now much smaller, anger at Macron’s government remains. Saturday’s demonstration serves as a remainder to the President a day before voters are set to go to the polls in local elections.

The elections are an important test for the former investment banker with opponents now particularly angered by his plans to reform the French pensions system. His party is not expected to do well.

“We had to come and mark the day to tell Macron that we’re still here and that we won’t accept his pension reform,” said one pensioner.

Voters will begin choosing mayors for 35,000 town halls and almost half a million councillors on Sunday, overshadowed by the coronavirus outbreak which is expected to hit turnout at the vote, which is usually relatively high.

Macron decided to go ahead with the elections despite the virus concerns, which have led the government to shut schools and universities, suspend major sporting events, curtail public transport and close tourism attractions. Disneyland Paris became the latest casualty on Saturday closing its doors until the end of March.

Swiss International to ground half its fleet, cut work hours