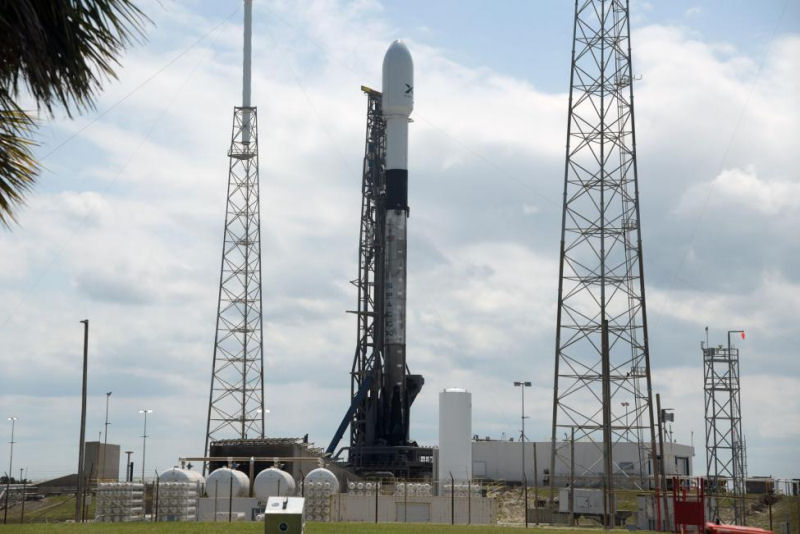 SpaceX is aiming for a Saturday morning launch of its sixth cluster of 60 Starlink satellites from Florida.

The launch is planned for 9:36 a.m. on a SpaceX Falcon 9 rocket from the company’s Complex 39A at Kennedy Space Center. The mission would boost the number of Starlink satellites in orbit to 362, by far the largest known satellite constellation.

Saturday’s mission has a 90 percent likelihood of good launch weather and no significant problems in the recovery zone for the booster landing, according to the Air Force weather forecast.

Starlink satellites are roughly the size of a large dinner table, each weighing over 500 pounds.

The space firm launched 60 Starlink satellites at a time in May, November, on Jan. 6 and 29 and Feb. 17, with two test satellites launched before that. The spacecraft are stacked in the rocket nosecone, using a flat-panel design that minimizes volume.

If all continues on track for Starlink, 100 or more such Starlink launches could occur in the next few years. SpaceX intends ultimately to launch thousands of satellites to beam broadband around the globe to provide high-speed Internet everywhere, even in extreme weather or aboard high-speed jets.

“Starlink is a bit of a black hole right now; they are not sharing much information,” Sachdeva said. “We do know there is interest from the U.S. military, and we believe most of their revenue will come from there rather than commercial customers.”

“Most of the company’s value is because of Elon Musk, not Starlink or their products. He is a good brand now,” she said. “No investors are directly funding Starlink. Company leadership has said it is funding the constellation itself.”

Starlink has drawn some concern from astronomers and stargazers who have seen the satellites as they reflect sunlight. In response, SpaceX launched a satellite in January with a non-reflective coating, to see if it is less visible on the ground.

The company has said it could take months before they can evaluate the coating. SpaceX didn’t respond to a request for an update.

The satellites orbit about 340 miles above the Earth. By comparison, the Kármán line that defines space is 62 miles high, and the International Space Station is more than 250 miles high.

The Starlink satellites detach from the rocket’s second stage at an altitude of about 180 miles. SpaceX engineers then conduct data reviews to ensure all Starlink satellites are operating as intended. Once the checkouts are complete, the satellites use onboard ion thrusters to move into the final orbit height.

SpaceX competitors plan their own new satellite constellations, including OneWeb and Jeff Bezos’ Amazon. SpaceX has said it is leveraging its experience in building rockets and spacecraft to deploy what it describes as the world’s most advanced broadband Internet system in Starlink.

Large asteroid will fly by the Earth next month, but won’t hit us, reassures NASA