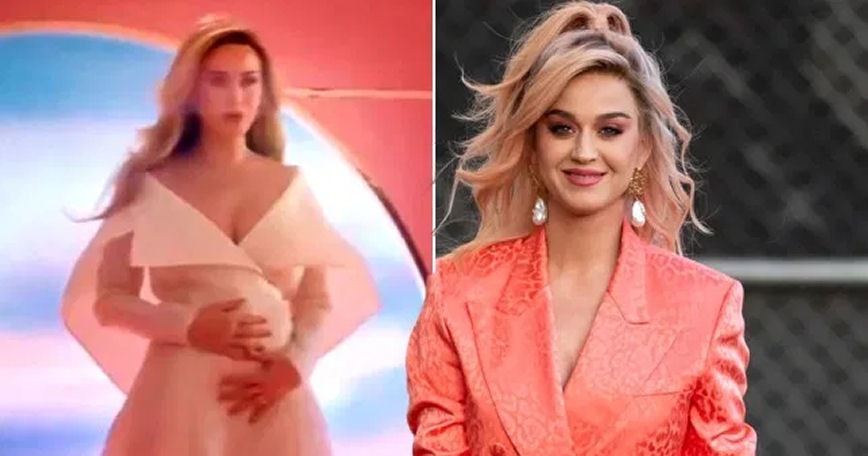 Katy Perry has sent her fans into meltdown as she cradled her stomach in a new music video teaser, with people convinced she’s pregnant.

The singer is set to release her new single and music video, Never Worn White, sharing a teaser clip on Twitter, which shows her donning a gown and cradling her stomach, as well as covering herself in flowers.

While the clips could just be a concept for her new video, fans are convinced she’s got a little one on the way.

‘KATY PERRY IS GOING TO SAVE POP INDUSTRY WITH HER PREGNANCY,’ one wrote, with another adding: ‘If she’s actually pregnant that would be all her dreams come true.’

Others think she’s channeling Lady Gaga, who previously announced she was ‘pregnant’ with her new album, with one fan writing: ‘She better be pregnant with #KP5.’

‘ANNOUNCE THE PREGNANCY MA’AM,’ one more told her.

Basically, we have no idea what to think.

You are cordially invited to the premiere of #NeverWornWhite 🤍 Join me on the @YouTube watch page tonight at 8:30pm PT and chat with me (promise not a bot! 😛) before the video premieres at 9pm PT! pic.twitter.com/igYGhBKqWH

Katy’s last album, Witness, was released back in 2017, debuting at number one in the US – so the prospect of KP5 is a huge deal. Meanwhile, she’s been planning her wedding with her fiancé Orlando Bloom, after the actor popped the question on Valentine’s Day last year. Chatting about planning the big day, she explained to Stellar magazine: ‘Orlando and I are united with our approach.

‘It’s not about the party it’s about the coming together of people who will hold us accountable when things get really hard. Those are just the facts when you’re with someone who challenges you to be your best self.’  Katy began dating the Pirates of the Caribbean actor in 2016 but split a year later. They found their way back to each other again in April 2018 and have been going strong since.

Celebrating the one-year anniversary of their engagement, Katy shared a sweet photo of her and Orlando posing in front of a heart-shaped flower wall and said: ‘One year ago I said yes to a life of love and evolution… and definitely never a dull moment.’  The couple have not shared a wedding date but they are rumoured to be tying the knot later this year.