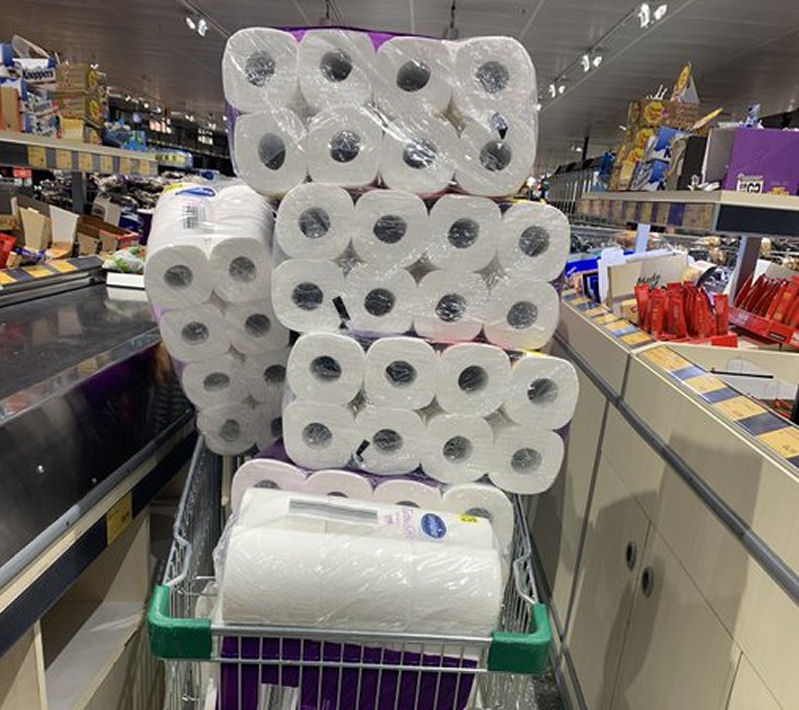 Panicked consumers the world over are picking supermarket shelves clean, as coronavirus concerns inspire stockpiling. Everything from hand sanitiser to non-perishable food is being bought up, inspired by fears not only of Wuhan-style lockdowns, but also import restrictions or factory closures that could impact supply and cause shortages.

Such shortages are not currently imminent threats. Still, that hasn’t stopped people hoarding, with things getting particularly weird Down Under. To the confusion of all, Australians have focused on one particular product: the humble toilet roll.

To be clear, there is absolutely no need for Australians to stockpile what’s fondly known here as bog roll. The majority of the country’s TP is made within Australia, and is unlikely to be impacted by the coronavirus outbreak at this stage. The current scarcity has been entirely caused by hordes of people grabbing more toilet paper than they reasonably need.

The women behind me at the Aldi check out #toiletpaper #coronavirusaustralia pic.twitter.com/XnenmvnQaR

It’s a self-fulfilling prophecy, and what’s more, many Australians don’t even understand why they’re doing it.

Why are people stocking up on toilet paper specifically. does everyone plan on shitting themselves to death

panic buyers that are just grabbing 72 weeks worth of bog roll are going to realise ten days into the lockdown that they can’t shit if they don’t eat.

Primarily, people seem to be buying toilet paper purely because it’s what everyone else is doing. Several shoppers told Australian website 10 daily that seeing the amount of toilet paper others were grabbing made them worried about supply, so they were getting in while they could. It’s essentially a stampede.

“Herding is exacerbated in periods of uncertainty, so when we’re unsure of something, we follow safety in numbers and do what everyone else is,” retail expert Professor Gary Mortimer told 10 daily.

Australia admittedly isn’t the only country that is hoarding toilet tissue. People in Japan and the U.S. have also been piling their shopping carts with rolls. However, Australia has gotten weirdly intense about their butt wipes.

The largest TP manufacturer in the country ramped up production to 24 hours a day to keep up with demand. Australian supermarket chain Woolworths imposed a limit of four packs per customer on Wednesday as it struggled to keep up with demand. The same day, police were called to one of their New South Wales stores after a shopper allegedly pulled a knife during a dispute over toilet rolls.

It seems Australia decided to skip a few steps in the global slide toward a lawless post-apocalypse.

How’s parramatta coping with this toilet paper situation? Oh someone pulled a knife on people in the Woolworths? Cool cool.

On top of generating the supply shortage shoppers feared, Australia’s panic buying is also harming more vulnerable or disadvantaged people. Those who can’t afford to stockpile toilet paper in bulk during the current rush may now be unable to buy it once they can, leaving pensioners, people on unemployment benefits, and those living between pay checks in a difficult position.

Overall, Australia’s panicked toiletry shopping is doing much more harm than good, if any good at all.

It’s been a remarkably disproportionate response, particularly considering Australia has only had 42 confirmed cases of coronavirus (or rather COVID-19, the illness the virus causes) thus far. There has been absolutely nothing to warrant this apocalyptic reaction.

Apparently, just like love, fear of a poopy butt is irrational.

If you are one of the people who has panic-bought a 6-month supply of toilet paper I think you should go home and look at your enormous pile of toilet paper and think about what you’ve done.