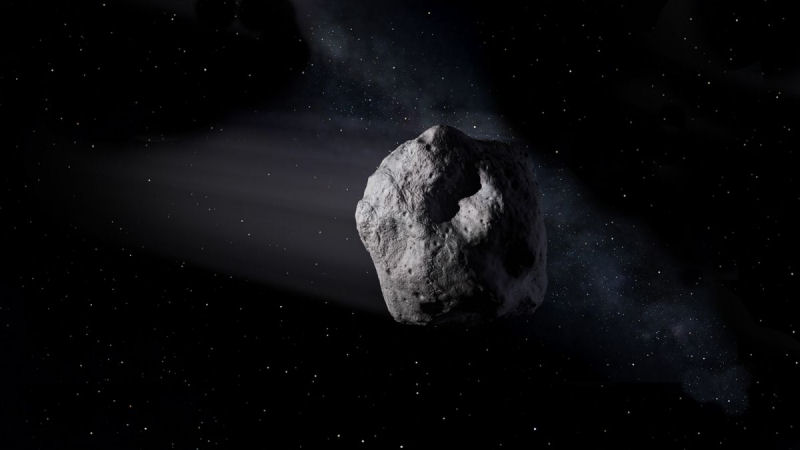 On April 29, an asteroid estimated to be between 1.1 and 2.5 miles wide will fly by Earth. But it’s not expected to collide with our planet, thankfully. If it did, the asteroid is “large enough to cause global effects,” according to NASA, back when the asteroid was first discovered.

The flyby is expected to occur on Wednesday, April 29, at 4:56 a.m. ET, according to NASA’s Center for Near Earth Object Studies. They track Near-Earth Objects that could collide with Earth.

The asteroid was classified as a potentially hazardous object because it passes near Earth’s orbit, but it’s not currently on NASA’s list of potential future Earth impact events. Those are gathered and monitored by NASA’s Sentry System, “a highly automated collision monitoring system that continually scans the most current asteroid catalog for possibilities of future impact with Earth over the next 100 years.”

It’s the largest asteroid expected to zip by Earth within the next two months, but it’s not the largest ever.

That honor belongs to the asteroid 3122 Florence (1981 ET3), which flew by and luckily missed colliding with Earth on September 1, 2017. It will make another pass again on September 2, 2057. That asteroid is estimated to be between two and a half and five and a half miles wide.

In addition to tracking Near-Earth Objects that could pose a threat, NASA and other agencies currently have missions underway to study near-Earth asteroids and potentially mitigate the danger of a collision. The observatory is located on the Cerro Pachón ridge in north-central Chile.

Knowing the size and orbit of an asteroid is the main battle, as this enables prediction of Near-Earth Objects.

This year, the Vera C. Rubin Observatory will come online and enable the discovery of tens of thousands of asteroids in orbits that could bring them closer to Earth, said Ed Lu, executive director of the Asteroid Institute and a former NASA astronaut.

“It’s an exciting time for planetary defense because we are on the verge of an absolute flood of new observations that will allow us to track 10 times more asteroids than we’ve ever tracked before,” Lu said.

Missions like NASA’s OSIRIS-REx and Japan’s Hayabusa2 are exploring asteroids in our solar system and aim to return samples to Earth in the coming years. The Near-Earth Object Camera, called NEOCam, is characterizing near-Earth objects.

Other missions are also planned. NASA’s DART, which stands for Double Asteroid Redirection Test, is a planetary defense test to prevent an asteroid from hitting Earth. DART, which has a launch window opening in July 2021, will visit a binary asteroid system where two asteroids orbit one another and aim to deflect a small asteroid.

DART will crash into a moonlet (a small natural satellite) of near-Earth asteroid Didymos, that is comparable in size to an asteroid that could pose a threat.

The European Space Agency’s complementary Hera mission will precisely measure how it changed the velocity of the larger asteroid and study DART’s impact crater on the moonlet.

Related Topics:1981 ET31998 OR23122 Florence52768AsteroidCerro Pachón ridgeDARTDidymosEarthMoonletNASAScienceSpace & Time
Up Next

Astronomers detect biggest explosion in the history of the Universe