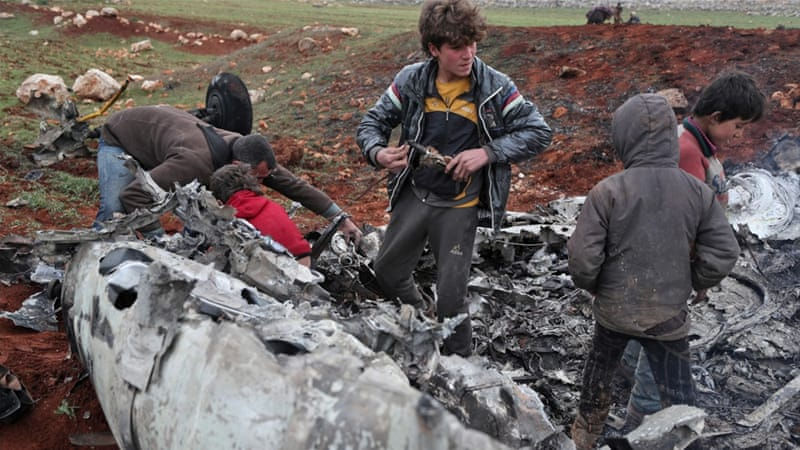 A Syrian military helicopter has been shot down in northwest Syria, where an intensifying government offensive to retake the country’s last rebel-held areas has caused a massive wave of displacement.

Syrian state media said the aircraft was hit by a missile at approximately 1:40pm (11:40 GMT) on Friday near the town of Urum al-Kubra in the western countryside of Aleppo.

“This led the helicopter to crash, killing all crew on board,” SANA news agency said, without providing any information on who was behind the incident.

The National Liberation Front rebel group claimed responsibility in a statement posted on the Telegram app.

Turkey’s Anadolu news agency also said rebels reported striking the helicopter while it was flying over the west of Aleppo province.

The agency said the helicopter took off from an area near the centre of Aleppo city amid “clashes between the opposition and regime forces” and was shot at from the Qibtan al-Jabal region. It was seen crashing, unleashing a plume of smoke, the agency reported.

The incident came days after rebels said they had downed another government helicopter on Tuesday near the town of Nairab.

Since December, the Russia-backed Syrian government forces have been pressing ahead with a ferocious assault on the last rebel bastion in the country’s northwest.

The offensive has triggered the largest wave of displacement in the nine-year war, with more than 800,000 people fleeing towards the Turkish border. Turkey, which already hosts 3.6 million Syrian refugees, says it cannot absorb any more.

Al Jazeera’s Hashem Ahelbarra, reporting from Clivegozu on the Turkish side of the border, said aid agencies are struggling to cope with the “huge number” of people displaced by the fighting.

The intensified fighting, which saw five Turkish troops killed this week in Syrian government shelling, is the most serious since Ankara, which is supporting certain rebel groups in northwest Syria’s Idlib province, first sent forces to its neighbouring country in 2016.

In recent weeks, Turkey’s military has deployed large convoys of vehicles carrying commandos, tanks and howitzers to shore up its military posts in Idlib.

The Syrian Observatory for Human Rights (SOHR), a UK-based war monitor that relies on sources in Syria, said on Friday that Turkey had deployed around 6,500 soldiers to reinforce existing units in the country’s northwest, as well as some 1,900 military vehicles since early February.

Meanwhile, government forces have made new gains in northwest Syria in recent days.

They are currently securing areas along the key M5 highway they seized from rebels this week, according to reports. They are pushing west of the motorway that connects Syria’s four largest cities and is economically vital for the government.

In an attempt to consolidate a “security belt” around the road, they captured a key base on Friday that they had lost to rebels in 2012, SOHR said.

The base’s recapture marks a symbolic win for the government, which has reduced the rebel-held pocket to just over half of Idlib province, as well as slivers of neighbouring Aleppo and Latakia.