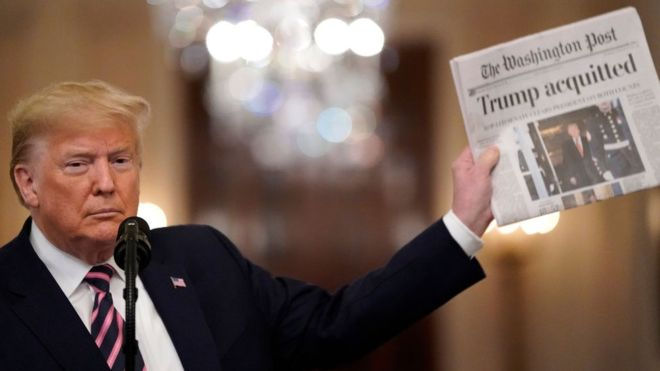 US President Donald Trump has taken a victory lap one day after his impeachment acquittal, in a White House tirade against his political enemies.

“I’ve done things wrong in my life, I will admit… but this is what the end result is,” he said as he held up a newspaper headlined “Trump acquitted”.

“We went through hell, unfairly. We did nothing wrong,” he said at the White House. “It was evil, it was corrupt.”

He earlier criticised impeachment foes who invoked their religious faith.

“Now we have that gorgeous word. I never thought it would sound so good,” Mr Trump said from the East Room, which was crammed with supporters and cabinet officials.

Mr Trump was impeached by the House of Representatives in December for abuse of power and obstruction of Congress, but was acquitted on Wednesday after a two-week trial in the Republican-controlled Senate, which did not include any witnesses.

Mr Trump also used a swear word to describe the justice department inquiry into whether his 2016 election campaign had colluded with the Kremlin.

Earlier in the day, Mr Trump spoke about his “terrible ordeal” of impeachment during the National Prayer Breakfast, an annual cross-party event in Washington DC to celebrate religious freedom.

M Trump continued: “I don’t like people that use their faith as justification for doing what they know is wrong.

“Nor do I like people that say ‘I pray for you’ when they know that’s not so.”

On Wednesday, Senator Mitt Romney cited his deep Mormon faith as he became the only Republican to vote to remove Mr Trump from office.

In December, Democratic House Speaker Nancy Pelosi, who launched the impeachment inquiry, cited her own Catholic faith as she said she prays for Mr Trump.

Mr Trump cited the matter again later in the East Room, saying: “I doubt she [Pelosi] prays at all.”

Reacting to Mr Trump’s prayer speech, Mrs Pelosi, who sat near Mr Trump as he spoke, told reporters: “He’s impeached forever, no matter what he says or whatever headlines he wants to carry around.

“You’re impeached forever. You’re never getting rid of that scar.”

Related Topics:Donald TrumpFeaturedimpeachmentU.S
Up Next

US Senate clears Trump of charges in impeachment trial