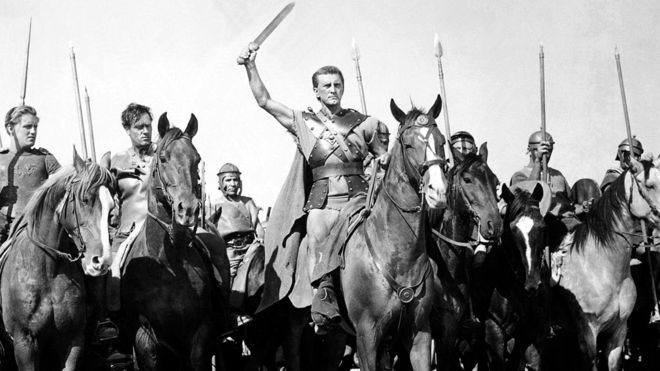 Kirk Douglas has been remembered as an “unforgettable” actor and a film “icon” following his death at the age of 103.

His daughter-in-law Catherine Zeta-Jones led the tributes, writing: “To my darling Kirk, I shall love you for the rest of my life. I miss you already.”

To my darling Kirk, I shall love you for the rest of my life. I miss you already. Sleep tight…

Douglas, who played the title role in the 1960 classic Spartacus, enjoyed a career that spanned seven decades.

Spielberg said Douglas left behind a “breathtaking body of work”.

He told The Hollywood Reporter: “Kirk retained his movie star charisma right to the end of his wonderful life and I’m honoured to have been a small part of his last 45 years.”

Jamie Lee Curtis, whose father Tony was also in Spartacus, declared: “He LOVED you as the world loved you. Your Passion. Talent. Politics. Family. Art. Strength.”

“I love you Spartacus, like the father I never had.” Antoninus
I did have a father and he LOVED you as the world loved you. Your Passion.Talent. Politics. Family. Art. Strength. I grew up with the Douglas boys. My love to Anne and all his family from mine. pic.twitter.com/nPlZIFQ7DW

Hamill described Douglas as “one of the biggest stars of all time”, as well as “a brilliant actor with an unforgettable, blazing charisma”.

He also referenced Douglas’s role in ending the 1950s Hollywood blacklist by defying the ban on working with film-makers with alleged communist sympathies.

Rob Reiner, who directed films including This Is Spinal Tap and When Harry Met Sally, described him as an “icon in the pantheon of Hollywood”.

KIrk Douglas will always be an icon in the pantheon of Hollywood. He put himself on the line to break the blacklist. My love goes out to my friend Michael and the whole family.

The Hollywood veteran’s death was announced on Wednesday by his son, fellow actor Michael Douglas.

“To the world he was a legend, an actor from the golden age of movies who lived well into his golden years,” he wrote on Instagram.

It is with tremendous sadness that my brothers and I announce that Kirk Douglas left us today at the age of 103. To the world he was a legend, an actor from the golden age of movies who lived well into his golden years, a humanitarian whose commitment to justice and the causes he believed in set a standard for all of us to aspire to. But to me and my brothers Joel and Peter he was simply Dad, to Catherine, a wonderful father-in-law, to his grandchildren and great grandchild their loving grandfather, and to his wife Anne, a wonderful husband. Kirk’s life was well lived, and he leaves a legacy in film that will endure for generations to come, and a history as a renowned philanthropist who worked to aid the public and bring peace to the planet. Let me end with the words I told him on his last birthday and which will always remain true. Dad- I love you so much and I am so proud to be your son. #KirkDouglas

Kirk Douglas rose to prominence during Hollywood’s “golden age”, earning the first of three Oscar nomination for the 1949 film Champion.

As Spartacus, the leader of a Roman slave revolt in Stanley Kubrick’s 1960 historical epic, Douglas helped to provide one of Hollywood’s first catchphrases.

After a Roman general declared that a group of slaves would only avoid crucifixion if they identified Spartacus, all of the slaves stood up and declared “I’m Spartacus”.

The now immortal phrase has continued to be used in modern culture and as a meme, to show solidarity with someone, or to stop a person’s identity being revealed.

Breaking Bad star Bryan Cranston used the phrase to sign off after his glowing tribute to “a towering presence in film history”.

Thinking about Kirk Douglas and his family tonight. Not only was he a towering presence in film history. He also risked his career and financial stability to do the right thing to help break the Blacklist. That kind of heroism makes all of us stand up and shout, I AM SPARTACUS pic.twitter.com/ujaMzeiN39

Douglas’s second Oscar nod came for his part in 1952’s The Bad And The Beautiful, in which he starred alongside Lana Turner.

He was able to move with the times and avoid the pitfalls of typecasting. In 1956 he attracted rave reviews and then a third Oscar nomination for his portrayal of the anguished Vincent van Gogh in Vicente Minnelli’s Lust For Life.

George Hamilton, who starred alongside Douglas in 1962’s Two Weeks in Another Town, said the star was “a consummate professional, wonderful guy and he knew every part of making films”.

He added: “He understood it all and he taught me humility when it comes to being an actor. It’s a very difficult thing to do right and he did it right all the time.”

Mitzi Gaynor starred alongside Douglas in the 1963 film For Love Or Money, and thanked him for sharing his “amazing talent”.

Bravo Kirk Douglas on an incredible life. Thank you for so generously sharing your amazing talent with all of us. The film we made together will always hold a special place in my heart. My love to Anne & your beautiful family. #KirkDouglas

Condolences to the family of Kirk Douglas. What an incredible icon he was in this industry! 😞

Condolences to the family of Kirk Douglas. What an incredible icon he was in this industry! 😞

Kirk Douglas. The inspirational Scalawag. 103 years on this earth. That’s got a nice ring to it! Great hanging with you man.

“I wanted to be an actor ever since I was a kid in the second grade. I did a play, and my mother made a black apron, and I played a shoemaker. After the performance, [my father] gave me my first Oscar: an ice cream cone.” -Kirk Douglas

Goodbye to a Hollywood legend. pic.twitter.com/vnu1Hkb2FA

Douglas faced difficulties in his personal life. He narrowly survived a helicopter crash in 1991 that left two people dead. Five years later, he suffered a major stroke that affected his speech.

In his later years, he turned his attention to charity. He donated millions of dollars to charitable causes and helped fund an Alzheimer’s unit at a retirement home in Los Angeles.