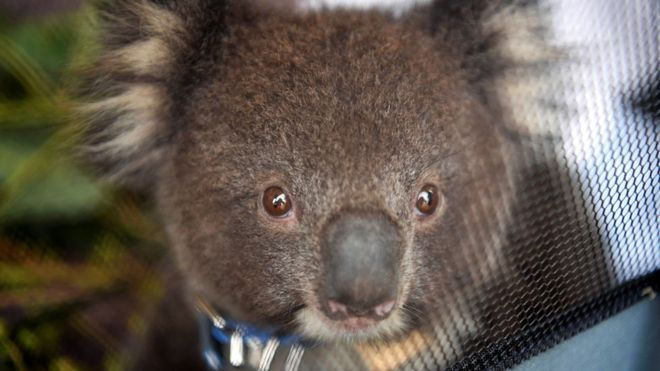 Dozens of koalas have been found dead or injured at a timber plantation in the Australian state of Victoria, sparking an investigation by officials.

Blue gum trees – an important koala habitat – were harvested from the plantation in December, leaving only a few isolated stands of trees.

Some koalas had starved to death in the remaining trees. Others were apparently killed by bulldozers.

About 80 surviving koalas have been removed and are being cared for.

The deaths come after tens of thousands of koalas were killed in the bushfires that have ravaged Australia. The marsupial is listed as “vulnerable” by Australia’s Environment Ministry.

After the plantation was logged in December, reports of hundreds of starving koalas came in, environmental group Friends of the Earth Australia said.

“People apparently witnessed the bulldozing of many dead koalas into slash piles,” it said.

The Department of Environment, Land, Water and Planning said it was prepared to prosecute over the incident.

Local resident Helen Oakley, who first raised the alarm on Wednesday, posted a video to Facebook, saying she had seen dead koalas at the site.

“There are koalas lying there dead,” she said. “Mothers killed and their little babies. Australia should be ashamed of this. We need help.”

Animal protection group Animals Australia said it has sent teams to the site in order to “save as many of these precious animals as possible”.

With the support of local authorities and wildlife carers, Vets are seeking to save as many of these precious animals as possible. We appreciate the of concern from so many caring people, but please know there is no need for further volunteers.

We will update when we can. 💔🐨 pic.twitter.com/ckBCmyOiWq

It added: “We are still gathering the details as to what has occurred in this case but it would appear that there are various breaches of legislation, including the Prevention of Cruelty to Animals Act, which we will be supporting authorities to pursue.”

Andrew Pritchard from the Department of the Environment said 25 koalas had been euthanised. He told ABC News the surviving koalas would be “rehabilitated at a later stage”.

The company behind the logging is currently unclear. According to the logging industry, the blue gum trees were harvested in November and the contractor followed all of the protocols in place to protect the animals.

However, Animals Australia said it was investigating several apparent breaches of legislation.

“By law, the companies that own these plantations must provide koala ‘spotters’ to identify koalas in trees before logging commences, so that animals can be safely removed and relocated. There is also a legal responsibility to ensure the welfare of koalas after logging has ceased,” it said.

The Australian Forest Products Association said the remaining trees were cleared after the contractors had left. It has vowed to investigate the incident.

Chief Executive Ross Hampton told The Age: “It is unclear as yet who bulldozed the trees with the koalas apparently still in them, but it is absolutely certain that this was not a plantation or a forestry company.

“We support all those calling for the full force of the law to be applied to the perpetrator.

The incident comes after a number of koalas were killed in recent bushfires in the country.

Fires, then floods. Now Australians need to watch out for deadly spiders