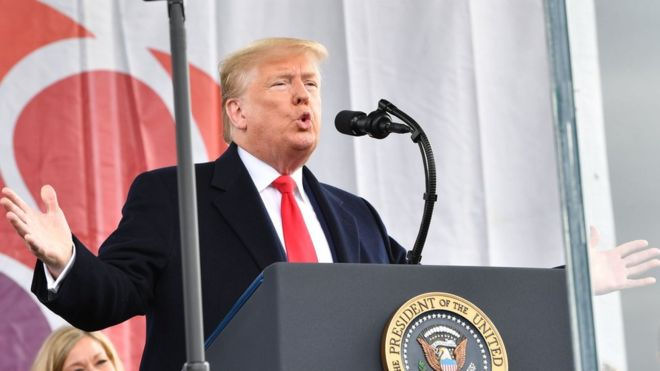 He addressed thousands of protesters at the March for Life near the US Capitol where his impeachment trial is ongoing.

Mr Trump said: “We’re here for a very simple reason: to defend the right of every child born and unborn to fullfil their God-given potential.”

The annual demonstration first began in 1974 – a year after the US Supreme Court legalised abortion in Roe v Wade.

Until now no president had ever attended the march, which takes place just steps from the White House, though previous Republican presidents, including George W Bush and Ronald Reagan, have addressed the group remotely.

Mike Pence became the first sitting vice-president to attend the rally in 2017.

Voters who support limiting abortion make up a key constituency for Mr Trump, who is seeking their support at the polls again in the 2020 election.

On Friday, marchers in Washington shouted “four more years” and “we love you”.

On the streets surrounding the National Mall vendors selling Trump flags and Make America Great Again hats were aplenty. Many of the attendees sported pro-Trump merchandise, though for some, there was a distinction between liking the president and liking his anti-abortion stance.

One young woman, Julia, told the BBC: “I’m not necessarily pro-Trump, but I appreciate that the President of the United States is making the move to be here.”

She added that she was unhappy at all the focus on Mr Trump as opposed to the issue.

“Until the day we can see Roe v Wade switched, [the movement] will continue, whether he’s president in the next election or not.”

Chuck Raymond, a financial advisor in St Louis, said: “Without a doubt, he is the most pro-life, pro-family, pro-religious freedom president we’ve ever had.”

Mr Trump’s appearance on Friday has already made a difference for some voters.

Jose Sandoval, who drove nine hours from Knoxville, Tennessee, to participate in the march, said he did not vote for Mr Trump in 2016, but his attendance has changed Mr Sandoval’s mind for 2020.

“I really appreciate what he’s doing for us,” he told the BBC. “It matters what he thinks about [abortion], and this changed my thinking about him.”

Mother-daughter pair Marci and Jeanette Houle had a similar journey down to the capital – 10 hours in a bus from New Hampshire. Marci said they appreciated that the president was backing up his anti-abortion stance with his presence.

“We voted for Trump in the first place because he was the pro-life [anti-abortion] choice, that was our main concern. If his opponent [in 2020] is not pro-life, we’re going to vote for Donald Trump.”

In 2016, 81% of Evangelical voters – a group for whom abortion is the biggest political issue – backed Mr Trump for president. He has continued to court them as his re-election campaign ramps up.

March for Life president Jeanne Mancini said Mr Trump and his administration “have been consistent champions for life”.

But pro-choice groups said his appearance was a distraction tactic.

Ilyse Hogue, the president of NARAL Pro-Choice America, said it was “a desperate attempt to divert attention from his criminal presidency and fire up his radical base”.

America’s two main political parties are more polarised than ever on the issue of abortion.

Democrats campaigning for November’s White House election are unapologetically pro-choice – something many March for Life attendees said made the candidates inaccessible to anti-abortion supporters, even if they disliked Mr Trump.

In 2016, the Democratic party for the first time included in its platform a call to repeal the Hyde Amendment, a decades-old law that prohibits using taxpayer money for abortions.

Last year, leading White House contender Joe Biden was sharply criticized by his Democratic rivals for initially backing the Hyde Amendment. Amid uproar from the party’s liberal base, he reversed course in June.

Mr Trump, meanwhile, has bolstered support for anti-abortion views within the Republican party.

In 2018, he was the first sitting president to address the Campaign for Life gala, sponsored by the Susan B Anthony List anti-abortion political action group. Earlier this week, the group announced it would spend $52m in support of the president and Republicans in 2020.

Anti-abortion activists across the nation have been pushing abortion bans through state legislatures – measures that in some cases would bar an abortion as early as six weeks into a pregnancy.

Last year, 17 states enacted some form of abortion restriction, according to the Guttmacher Institute, which promotes research on abortion access.

Anti-abortion groups hope the lawsuits will reach the US Supreme Court, which is now stacked with conservative-leaning justices, and ultimately result in Roe v Wade being overturned.

Such a monumental decision would enable individual states, such as those in the South and Midwest, to enshrine the abortion bans they have already passed.

In a few weeks, the justices are expected to take up the first major abortion related case since the arrival of Trump appointees Brett Kavanaugh and Neil Gorsuch.

Sarah Schultz, who flew in from South Dakota for the rally, said that “the presidency has helped [Mr Trump] figure out the issues for himself”.

“He’s making a clear line,” she said of his appearance on Friday. “People are going to be drawn to one side or another now – they have to take a stand.”

Ms Schultz adds: “I like that the issues are clearer, but in this country, we should be able to discuss our differences without getting angry.”