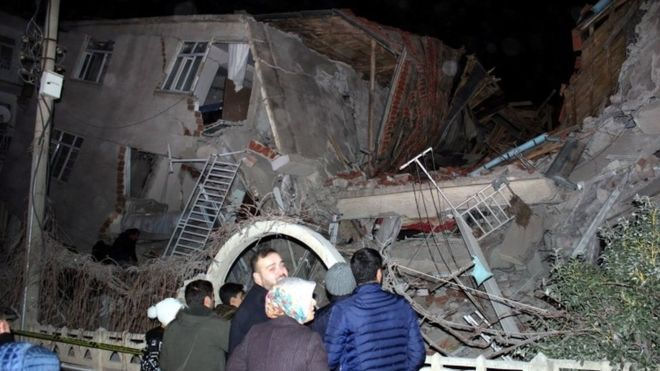 At least 14 people have been killed in a powerful earthquake in eastern Turkey, officials say.

The 6.8 magnitude quake, centred on the town of Sivrice in Elazig province, caused buildings to collapse and sent residents rushing into the street.

Tremors were also felt in neighbouring Syria, Lebanon and Iran.

Earthquakes are common in Turkey – about 17,000 people died in a massive quake in the western city of Izmit in 1999.

The governors of Elazig and neighbouring Malatya said several people had died in each province in the latest quake.

The region struck by the quake, some 550km east of the capital Ankara, is remote and sparsely populated, so details of damage and fatalities could be slow to emerge.

Officials have sent beds, tents and blankets to the area, where overnight temperatures regularly fall below zero.

Sivrice, a town of about 4,000 people, is a popular tourist spot on the shore of Hazar lake, the source of the river Tigris.

Many in U.S. support decision to kill Iran general