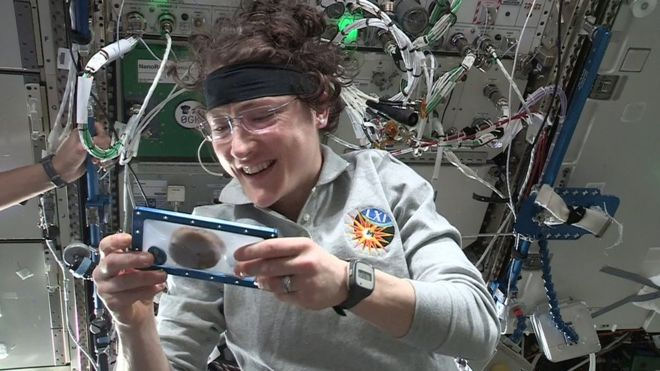 Chocolate chip cookies have become the first food to be baked in space in a first-of-its-kind experiment.

Sealed in individual baking pouches, three of the cookies returned to Earth on the SpaceX Dragon spacecraft on 7 January.

The aim of the experiment was to study cooking options for long-haul trips.

The results of the experiment, carried out by astronauts Luca Parmitano and Christina Koch, were revealed this week.

The question is: how do they taste? The answer: nobody knows, yet.

A spokesman for Double Tree, the company that supplied the dough, told the BBC the cookies would “soon undergo additional testing by food science professionals to determine the final results of the experiment”.

These tests will establish whether the cookies are safe to eat.

For the experiment, five cookies were baked over several days to determine the ideal cooking temperature and time.

On Earth, it takes about 20 minutes to bake cookies at a temperature of around 150C (300F). The astronauts found that, in space, it takes far longer.

As the cookies were baking, Mr Parmitano, an Italian astronaut for the European Space Agency, kept mission control abreast of their progress.

Tweeting from space in December, Ms Koch, a Nasa astronaut, wrote about making the cookies in space:

We made space cookies and milk for Santa this year. Happy holidays from the @Space_Station! pic.twitter.com/sZS4KdPmhj

They were baked in a prototype oven built by NanoRacks and Zero G Kitchen, which create appliances for microgravity use in long-duration space flights.

A cargo craft containing the oven and baking ingredients took off from the US state of Virginia in November last year.

Zero G Kitchen describes the oven as “a cylindrical-shaped insulated container designed to hold and bake food samples in the microgravity environment”.

The oven heats food through electric heating elements, similar to those found in a toaster oven, the company says.