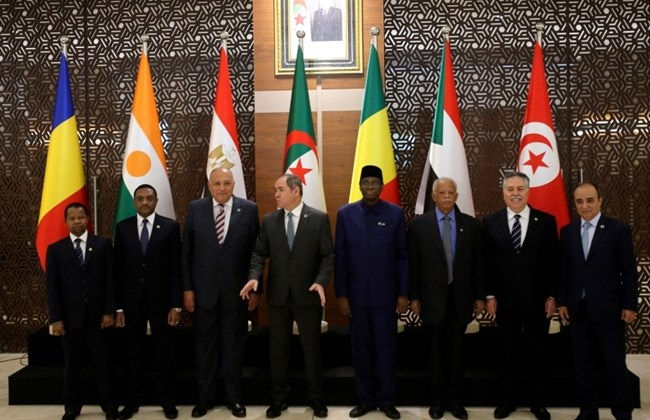 Top diplomats from Libya’s neighboring countries and beyond met in the Algerian capital Thursday amid intensifying international efforts to end the conflict tearing apart the oil-rich North African country.

The meeting brought together foreign ministers from Egypt, Sudan, Chad, Niger, Algeria, Tunisia and Mali. All of the nations but Mali border Libya, and all have suffered fallout from the fighting between the forces of Libya’s U.N.-backed government in Tripoli and eastern-based forces led by Gen. Khalifa Haftar.

World powers are pushing both sides to respect a tentative truce.

“Libya has been in turmoil. The conflict there has increasingly turned into a proxy war by foreign powers that are far away and much less affected by what is happening,” said German Foreign Minister Heiko Maas, who also took part in the meeting.

Maas, whose country hosted a Libya peace summit Sunday, said much of the fallout from the conflict, including organized crime, terrorism, smuggling of weapons and humans, and flows of refugees, has been borne by Libya’s neighbors.

“It is therefore the neighbors that have the most interest in peace and stability in Libya,” he said.

Algeria said countries attending the meeting agreed to respect Libya’s sovereignty and integrity, want the African Union to be involved in resolving the conflict, and back efforts to stop weapons from flowing to warring parties.

Haftar’s forces, which control the east and much of southern Libya, receive support from the United Arab Emirates and Egypt, as well as France and Russia. The Tripoli-based government is backed by Turkey and to a lesser degree, Qatar and Italy.

Germany’s Maas said international actors must maintain “persistent pressure” on the warring parties to turn the temporary truce into a stable cease-fire.

He said Germany would support efforts by the United Nations to shore up the tentative truce through a meeting between representatives of Libyan Prime Minister Fayez Sarraj, the head of the Tripoli government, and Haftar.

“For this the persistent pressure of all international partners on the conflict parties is required,” Maas said.

The Tunisian president’s office said Maas also stopped in Tunis and told President Kaïs Saied that Germany regretted not inviting Tunisia in time for a representative to attend the Sunday summit and wants to involve Tunisia in Libya peace efforts going forward.

Separately, the U.N.-backed Government of National Accord in Libya decided Thursday to reopen Tripoli’s Mitiga International Airport, which was shut down a day earlier following an attack and threats from Haftar’s forces.

However, flights were grounded again after a spokesman for Haftar’s forces, Ahmed al-Mosmari, said they were imposing a no-fly zone over the Mitiga airbase and “any civilian or military aircraft that breaches the airspace will face a strong and immediate response.”

The Tripoli-based government issued a statement saying that Mosmari’s threats reflected the intention of Haftar’s forces to commit war crimes.

As the sole landing strip for the U.N.-backed government as well as its major military base, Mitiga is a strategic target for the opposition forces.