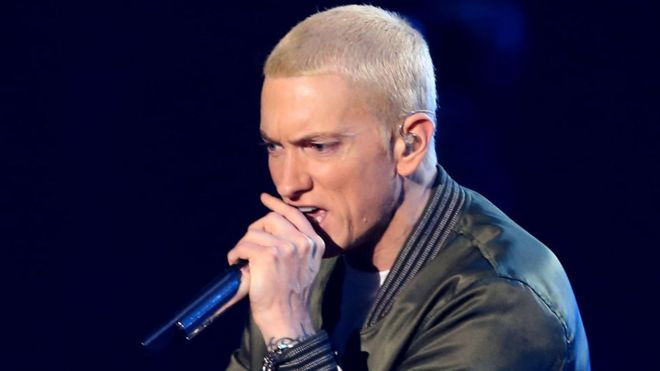 Eminem has responded to the recent criticism of his lyrics, saying his new album was “not made for the squeamish”.

The rapper was criticized for the track Unaccommodating, which references the Manchester bomb attack that killed 22 people at an Ariana Grande concert.

Eminem said some lyrics on the album were “designed to shock the conscience, which may cause positive action”.

He added the album is not intended for people who are “easily offended or unnerved”.

On the opening song on the album, Eminem raps: “I’m contemplating yelling ‘bombs away’ on the game/Like I’m outside of an Ariana Grande concert waiting,” followed by the sound of an explosion.

In the statement posted on Twitter, the hip-hop star suggested the offending lyrics had been taken out of context, were not intended to be taken literally, and fitted a broader violent theme across the LP.

“In today’s wonderful world, murder has become so commonplace that we are a society obsessed and fascinated by it. I thought why not make a sport of it, and murder over beats? So before you jump the gun, please allow me to explain.

“This album was not made for the squeamish. If you are easily offended or unnerved at the screams of bloody murder, this may not be the collection for you. Certain selections have been designed to shock the conscience, which may cause positive action. Unfortunately, darkness has truly fallen upon us.

“So you see, murder in this instance isn’t always literal, nor pleasant. These bars are only meant for the sharpest knives in the drawer. For the victims of this album, may you rest peacefully. For the rest of you, please listen more closely next time. Goodnight!

Music To Be Murdered By, which is the rapper’s 11th album, is battling Manchester band The Courteeners for the number one spot in the UK chart this week.

Eminem, whose real name is Marshall Mathers, has a history of causing controversy with his lyrics.

His last album, 2018’s Kamikaze, was criticised for its use of a homophobic slur on the lead single, Fall.

Simpsons actor says he will no longer voice Apu