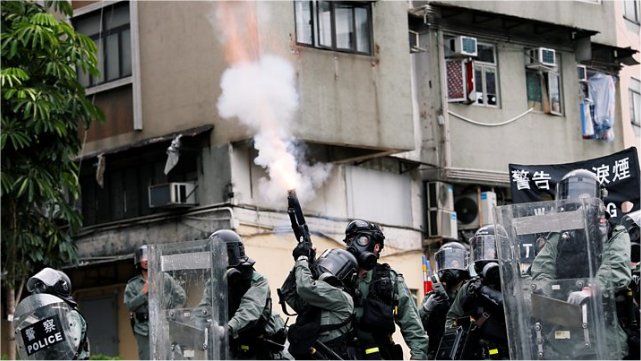 Hong Kong police have fired tear gas at an unauthorized protest held by tens of thousands of people to condemn an attack by armed masked men last week.

As a small group of protesters refused to disperse in the northern district of Yuen Long, police fired rubber bullets.

The demonstration took place where pro-democracy protesters had been attacked by suspected triad gang members.

Police have been accused of turning a blind eye and colluding with the attackers, claims they deny.

Hong Kong has seen seven weeks of anti-government and pro-democracy protests sparked by a controversial bill that would have enabled extraditions to mainland China.

The government has since halted the legislation but protesters have demanded its complete withdrawal, as well as an inquiry into police violence, democratic reform, and that the territory’s leader Carrie Lam resign.

Saturday’s march had been banned by the police, a highly unusual move in the territory, where protests are usually allowed.

Police say they refused permission because they feared violent clashes between protesters and residents.

The rally was planned as a response to last Sunday’s attack, in which about 100 men descended on Yuen Long’s metro station, beating protesters – as well as passersby and journalists – with wooden and metal sticks.

The attack left 45 people injured and was widely blamed on triad gang members. They appeared to target those wearing black, the color people had been told to wear for the protest.

Triads are known to be active in Yuen Long – located in a rural northern district in Hong Kong, near mainland China – and many local villagers have also expressed opposition to the pro-democracy protests.

Philippines President Duterte warns China to back off disputed island