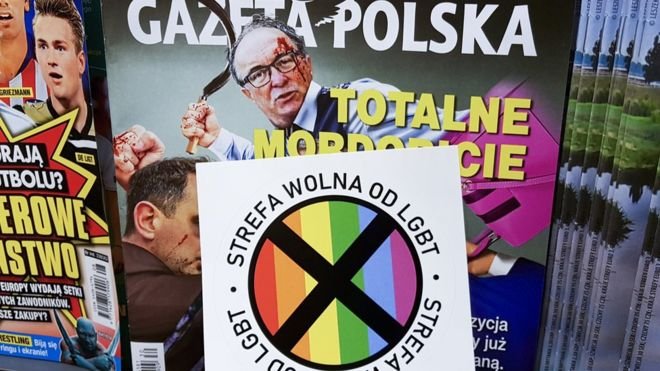 A Polish court has ordered conservative newspaper Gazeta Polska to halt the distribution of “LGBT-free zone” stickers it included in this week’s issue.

The stickers show a black cross superimposed on a rainbow flag.

The stickers had caused widespread outrage, and sparked criticism from the US ambassador to Poland.

It was not clear if it was just the stickers that were banned from sale or the magazine.

A lawyer who brought the legal action on behalf of a Polish LGBT activist said the ruling meant the stickers should immediately disappear from all places of sale, the liberal Gazeta Wyborcza reported.

But Tomasz Sakiewicz, editor-in-chief of Gazeta Polska, insisted the magazine had not been withdrawn from the shops.

The weekly publication – which has a circulation of around 110,000 – supports the conservative governing Law and Justice party (PiS).

The party’s leader, Jaroslaw Kaczynski, has criticized LGBT rights, describing them as a “threat to Polish identity”, and has made it a campaign issue ahead of October’s general election.

Violence broke out at the first gay pride march in the eastern Polish city of Bialystok at the weekend, as thousands of football hooligans and far-right supporters clashed with marchers and police.

Gazeta Polska, in an editorial, had justified the sticker by saying LGBT rights “have all the features of a totalitarian ideology”.

The activist who brought the legal action, Bartosz Staszewski, said: “It is extremely important that we do not give in to homophobia in the public zone.”

“I am disappointed and concerned that some groups use stickers to promote hatred and intolerance. We respect freedom of speech, but we must stand together on the side of values such as diversity and tolerance,” Ms Mosbacher tweeted.

Paweł Rabiej, the deputy mayor of Warsaw, likened it to the Nazi-era.

“As you can see this tradition finds worthy followers, this time in Poland,” he said, adding that it was happening “under the umbrella” of the governing party and bishops.

Polish attitudes to homosexuality are changing but gay marriage is still outlawed, unlike in many Western European countries.