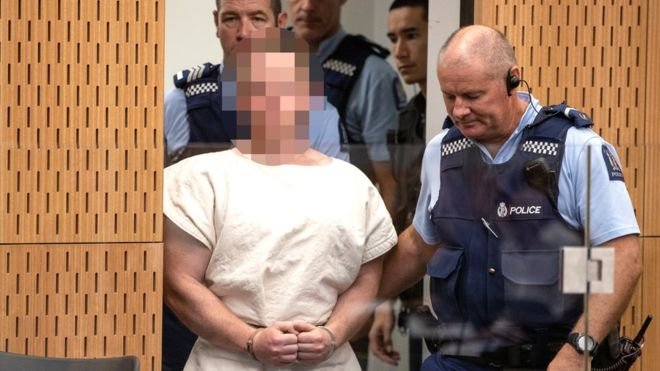 The main suspect in the killings of 49 people in shootings at two mosques in New Zealand on Friday has appeared in court on a single murder charge.

Australian Brenton Tarrant, 28, was brought to the dock in a white prison shirt and handcuffs. Further charges are expected to be made against him.

Two others are in custody. None of those detained had a criminal record.

The suspect, who stood silently during the brief hearing in Christchurch, was remanded in custody without a plea and is due to appear in court again on 5 April.

The court judge ruled that the suspect’s face should be pixellated in photographs and filming to preserve his fair trial rights.

Ms Ardern called the attack “an act of terror”, and officials are still carrying out the identification of the victims.

‘He wanted to continue’

Ms Ardern said the guns used by the attacker appeared to have been modified, and that the suspect’s car was full of weapons, suggesting “his intention to continue with his attack”.

Speaking at a news conference on Saturday, she said the suspect had obtained a gun licence in November 2017 that allowed him to buy the weapons used in the attack.

“The mere fact… that this individual had acquired a gun licence and acquired weapons of that range, then obviously I think people will be seeking change, and I’m committing to that.”

New Zealand’s Attorney-General David Parker said the government would look into banning semi-automatic weapons, but that no final decision had been made. Previous attempts to tighten gun laws in a country with a strong gun lobby and culture of hunting have failed.

Suspect ‘not on radar’

The suspect had “travelled around the world with sporadic periods of time spent in New Zealand,” Ms Ardern said, without formally identifying him.

She said New Zealand intelligence services had been stepping up investigations into far-right extremists, but added: “The individual charged with murder had not come to the attention of the intelligence community nor the police for extremism.”

Before the attacks, social media accounts in the name of Brenton Tarrant were used to post a lengthy, racist document in which the author identified the mosques that were later attacked.

The text is called The Great Replacement, a phrase that originated in France and has become a rallying cry for European anti-immigration extremists. The man said he had began planning an attack after visiting Europe in 2017 and being angered by events there.

The suspect sent the document to 70 people, including to Ms Ardern’s generic address, less than 10 minutes before the attack, the New Zealand Herald reports.

Relatives and friends have confirmed the identities of several victims, including:

Pakistan’s foreign ministry named six of its nationals who were killed, and said another three missing were still being identified.

Ms Ardern said financial support would be made available to those who had lost someone on whom they were financially dependent. A total of 48 people were wounded and 11 are said to be in a critical condition in hospital.

Christchurch Mayor Lianne Dalziel expressed “revulsion” at this “act of terrorism”, saying: “We have welcomed new people into our city. They’re our friends, they’re our neighbours.”

Muslims make up about 1.1% of New Zealand’s population of 4.25 million, according to the latest census figures. Numbers rose sharply as the country took in refugees from various war-torn countries since the 1990s.

The first report of an attack came from the Al Noor mosque in central Christchurch during Friday prayers at 13:40 (00:40 GMT).

A gunman drove to the mosque, parked nearby and began firing into the mosque as he walked in through the front entrance. He fired on men, women and children inside for about five minutes. He live-streamed the attack from a head-mounted camera and identified himself in the footage.

The suspect is then said to have driven about 5km (three miles) to another mosque in the suburb of Linwood where the second shooting occurred.

Police say they recovered firearms from both mosques, and explosive devices were found in a car belonging to one of the suspects.