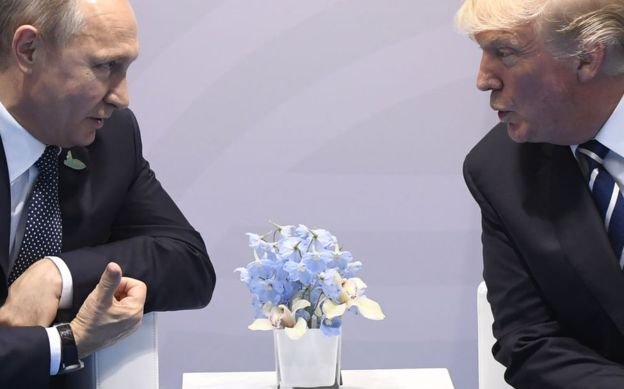 US President Donald Trump has denied working for Russia, pouring scorn on the latest reports to cast scrutiny on his relationship with Moscow.

Addressing reporters at the White House as he left for Louisiana, he said: “I never worked for Russia.”

He played down a Washington Post report that he had concealed a translation of a meeting with Mr Putin.

According to the New York Times meanwhile, the FBI launched a hitherto unreported inquiry into the president.

According to the newspaper, the FBI’s suspicions were raised after Mr Trump fired its director, James Comey, in May 2017.

Mr Mueller is leading an ongoing investigation into whether the Trump campaign colluded with the Kremlin to influence the 2016 presidential election.

Asked outside the White House on Monday if he was working for Russia, Mr Trump denied it outright before adding: “I think it’s a disgrace that you even ask that question because it’s a whole big fat hoax.”

The Republican president was posed the same question by a Fox News host on Saturday, and called it “the most insulting thing I’ve ever been asked”.

The New York Times notes in its own report no evidence has emerged publicly that Mr Trump took direction from Russian government officials.

On Monday, the president said his dismissal of Mr Comey was “a great service I did for our country”, while railing against FBI investigators as “known scoundrels” and “dirty cops”.

Related Topics:Donald TrumpJames ComeyMoscowRussiaU.S
Up Next