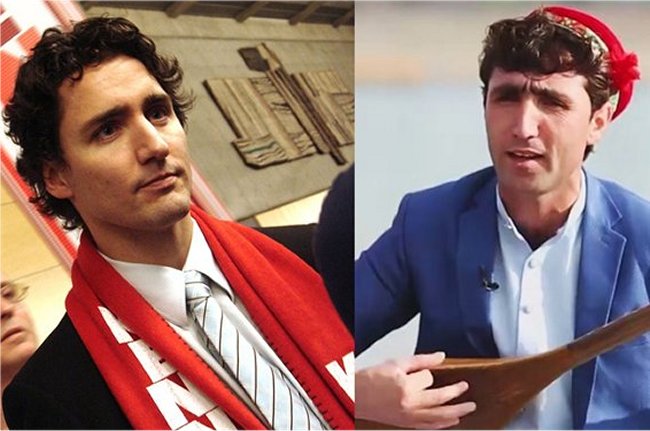 One is the leader of a G7 nation and the other is a wedding singer, but their striking likeness could sway a TV talent contest in Afghanistan.

The 29-year-old is competing on the popular singing contest Afghan Star.

A judge on the series pointed out the similarity, and Mr Maftoon is now among the final eight contestants.

“I didn’t know anything about Justin Trudeau until I saw the photos on social media,” the wedding singer from Badakhshan province told AFP news agency.

“The resemblance has boosted my chances of winning the competition by 50%.”

Salam Maftoon Afghan singer looks a lot like Canadian Prime Minister Justin Trudeau and his fans and followers are surprised at the resemblance. pic.twitter.com/nLSQCulccU

One of the show’s judges, Afghan-Canadian musician Qais Ulfat, told the BBC that he first noticed the resemblance when training up the 12 contestants who made it through to the finals.

“I noticed he looked a lot like my prime minister,” he said. “So I started giggling around with the host.”

The resemblance was pointed out on air, and Mr Maftoon quickly became a celebrity.

“Since then he’s gone viral,” Mr Ulfat said. “Everyone’s talking about him on social media.”

Afghan Star is one of the most popular shows in Afghanistan. It premiered in 2005, four years after the fall of the Taliban.

Since then the militant group has threatened the show, and called it un-Islamic.

But Mr Maftoon’s renditions of romantic folk songs in both Dari and Pashto – while dressed in clothing typical of his province – have impressed judges and audience alike.

“He is a very, very talented artist,” Mr Ulfat said. “I wish him the very best.”

The final will be held on 21 March, on the eve of Persian new year.

But Mr Maftoon already knows his newfound fame will help boost his wedding singing business back home, win or lose.

Now, he wants to meet his Canadian lookalike, “because he is a global personality and I am a poor man from a remote part of Afghanistan”, he told AFP.