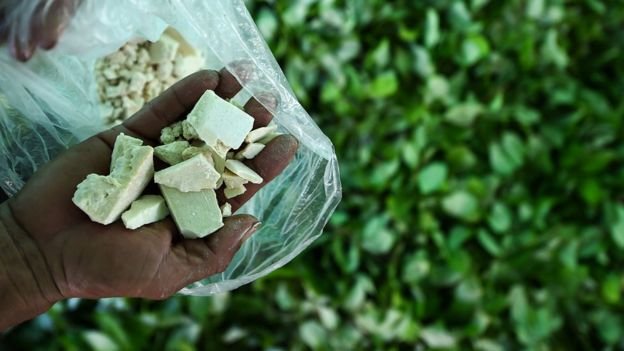 US Secretary of State Mike Pompeo says he is “deeply concerned” about the increased production of coca leaf, the raw material for cocaine, in Colombia.

At a meeting with Colombian President Ivan Duque, Mr Pompeo said the two countries would try to reduce coca production by 50% by 2023.

Colombia has already vowed to step up its coca eradication program.

A recent UN report said the amount of agricultural land used for coca crops in Colombia had hit record levels.

The country has fought for years to tackle cocaine production, with the US providing about $400m annually to help combat the producers and traffickers.

“The United States remains deeply concerned about the surge in coca cultivation and cocaine production in Colombia since 2013, and its impact on each of our two countries,” Mr Pompeo said while alongside President Duque in Cartagena.

“We know we must do our part to reduce demand in our country and we’ll work alongside you here as well.”

Mr Duque thanked the US for its support in the drugs war.

Speaking last month, Mr Duque said that more than 80,000 hectares of illicit crops had been eradicated in 2018. The government says it aims to remove another 100,000 hectares in 2019.

The UN Office on Drugs and Crime (UNODC) issued statistics in September that showed coca production acreage in Colombia in 2017 was the highest ever recorded.

The UN said the region bordering the Pacific ocean in Colombia was the most intensively cultivated.

On its own, the state of Narino on the frontier with Ecuador has more farmland dedicated to coca than the whole of Peru, which is another large producer.

Eighty per cent of the coca has been grown in the same area for the past 10 years, while crops produce 33% more coca leaf than they did in 2012, the report said.

In August, newly elected President Duque said the government would create a new drug-fighting policy, saying the goal was to have “concrete results” in the next four years.