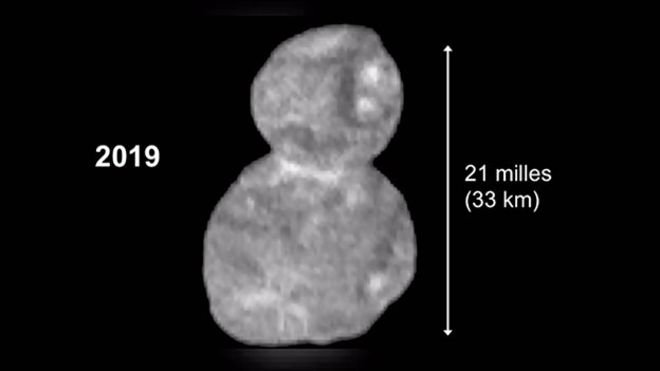 The ice world known as Ultima Thule has finally been revealed.

A new picture returned from Nasa’s New Horizons spacecraft shows the little world to be two objects joined together – to give a look like a “snowman”.

The US probe’s images acquired as it approached Ultima hinted at the possibility of a double body, but the first detailed picture from Tuesday’s close flyby confirms it.

The event set a record for the most distant ever exploration of a Solar System object. The previous mark was also set by New Horizons when it flew past the dwarf planet Pluto in 2015.

But Ultima is a further 1.5 billion km further out.

It’s in a region of the Solar System known at the Kuiper belt.

There are hundreds of thousands of Kuiper members like Ultima, and their frigid state almost certainly holds clues to how all planetary bodies came into being some 4.6 billion years ago.

Several factors make Ultima Thule, and the domain in which it moves, so interesting to scientists.

One is that the Sun is so dim in this region that temperatures are down near 30-40 degrees above absolute zero. As a result, chemical reactions have essentially stalled. This means Ultima is in such a deep freeze that it is probably perfectly preserved in the state in which it formed.

Another factor is that Ultima is small (about 35km in the longest dimension), and this means it doesn’t have the type of “geological engine” that in larger objects will rework their composition.

And a third factor is just the nature of the environment. It’s very sedate in the Kuiper belt.

Unlike in the inner Solar System, there are probably very few collisions between objects. The Kuiper belt hasn’t been stirred up.

New Horizons’ Principal Investigator Alan Stern said: “Everything that we’re going to learn about Ultima – from its composition to its geology, to how it was originally assembled, whether it has satellites and an atmosphere, and that kind of thing – is going to teach us about the original formation conditions in the Solar System that all the other objects we’ve gone out and orbited, flown by and landed on can’t tell us because they’re either large and evolve, or they are warm. Ultima is unique.”

First, the scientists must work on the Ultima data, but they will also ask Nasa to fund a further extension to the mission.

The hope is that the course of the spacecraft can be altered slightly to visit at least one more Kuiper belt object sometime in the next decade.

New Horizons should have just enough fuel reserves to be able to do this. Critically, it should also have sufficient electrical reserves to keep operating its instruments into the 2030s.

The longevity of New Horizon’s plutonium battery may even allow it to record its exit from the Solar System.

The two 1970s Voyager missions have both now left the heliosphere – the bubble of gas blown off our Sun (one definition of the Solar System’s domain). Voyager 2 only recently did it, in November.

And in case you were wondering, New Horizons will never match the Voyagers in terms of distance travelled from Earth. Although New Horizons was the fastest spacecraft ever launched in 2006, it continues to lose ground to the older missions. The reason: the Voyagers got a gravitational speed boost when they passed the outer planets. Voyager-1 is now moving at almost 17km/s; New Horizons is moving at 14km/s.

Our Universe: Bubble in an Extra Dimension