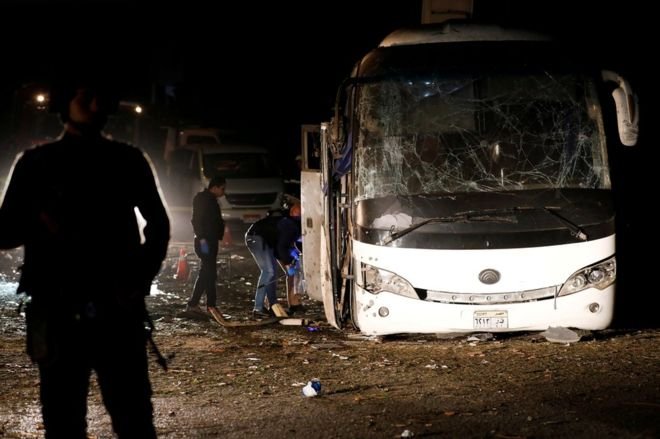 A roadside blast has killed four people – three Vietnamese tourists and a local tour guide – and injured 12 others on a bus near the Giza pyramids in Egypt, officials say.

A bomb hidden beside a wall went off as the bus carrying 14 Vietnamese tourists was passing.

The bus hit the device after it went off its planned route without alerting security forces, Mr Madbouly added.

All of the injured are Vietnamese tourists apart from the bus driver, who is Egyptian.

There were no immediate reports of any group saying it was behind the attack, but Islamist militants have targeted tourists in the past.

Two German tourists were stabbed to death at a hotel in the popular Red Sea resort of Hurghada last year.

Security is already tight in Egypt, with the tourist season at its height and the country’s main Christian minority, the Copts, preparing to celebrate Orthodox Christmas on 7 January.

The timing and location of the attack couldn’t be worse. It happened near the #Pyramids, at the peak of tourist season. It also comes days before the #Egyptian Xmas celebrated on the 7th of Jan. Police forces r already on high alert getting ready for the event. #Giza #blast

Our hearts go out to the families of the victims and all those affected in today’s incident in Giza, and to the Egyptian authorities as they respond.
The UK stands with Egypt in the fight against terrorism.

The bomb went off at about 18:15 (16:45 GMT) on Maryoutiya Street in Giza’s Haram district, the interior ministry says.

Security forces rushed to the scene in response and police are investigating.

The injured were taken to the nearby Haram hospital, Reuters news agency reports.

“We have been in contact with the embassy of Vietnam to contain the impact of the incident, and what is important now is to take care of the injured,” Prime Minister Madbouly was quoted as saying.