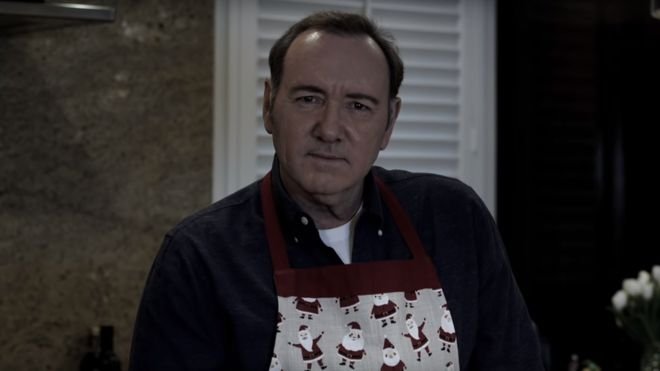 US actor Kevin Spacey has been charged with sexually assaulting a teenager at a bar in Massachusetts.

He will appear in court on 7 January over the incident, which allegedly occurred in Nantucket in July 2016.

On Monday, Mr Spacey posted a video in which he appears to deny any wrongdoing while in character as Frank Underwood from House of Cards.

“I’m certainly not going to pay the price for the things I didn’t do,” he says in the clip.

“You wouldn’t believe the worst without evidence, would you?” he asks. “You wouldn’t rush to judgements without facts.”

The alleged victim is the son of former television news presenter Heather Unruh, who spoke publicly about the incident last year.

She accused Mr Spacey of buying her then 18-year-old son alcohol – the drinking age in Massachusetts is 21 – and then groping him.

In the video, Mr Spacey speaks in Frank Underwood’s accent and addresses the viewer directly, much like he did throughout his five seasons on House of Cards.

Let Me Be Frank https://t.co/OzVGsX6Xbz

“Of course some believed everything,” he says. “They’re just waiting with bated breath to hear me confess it all.”

“They’re going to say I’m being disrespectful, not playing by the rules,” he adds. “Like I ever played by anyone’s rules before. I never did. And you loved it.”

Frank Underwood was the power-hungry and conniving protagonist of the Netflix series, and murdered a journalist and a politician before he was killed off ahead of season six.

The three-minute clip, which is titled Let Me Be Frank, marks Mr Spacey’s first public appearance since the first allegation of sexual assault was made against him last November.

He was accused by actor Anthony Rapp of making a sexual advance in 1986 and a number of other allegations have since emerged.

Mr Spacey said he had no memory of the event but publicly apologised before issuing an “absolute” denial of the other allegations.

Separately, in September, the Los Angeles County District Attorney’s office said Mr Spacey would not be prosecuted over an accusation of sexual assault that allegedly took place in 1992.

It said it fell outside of California’s statute of limitations.

The controversy has led to Mr Spacey being axed from a number of roles, including from House of Cards and the 2017 film All the Money in the World, which was re-shot without him.

A film in which he appears, Billionaire Boys Club, also took a record-breaking low of $126 on its first night in US cinemas in August.