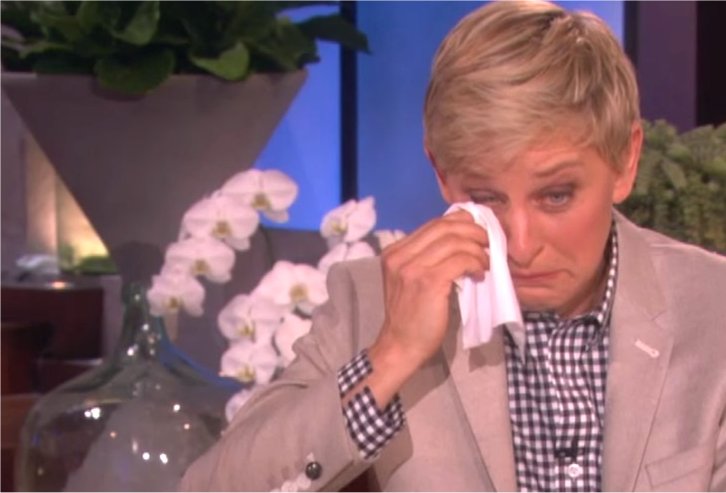 Ellen DeGeneres extended her contract on The Ellen DeGeneres Show through the 2019-2020 television season, according to The Hollywood Reporter, and it seemed like a no-brainer at the time. The show’s ratings demonstrated growth every year, making it a rare daytime celebrity-centered talk show that wasn’t just successful, but steadily improving in viewership. On top of that, the DeGeneres’ infectiously positive vibes just made viewers feel happy, especially with her signature sign off of, “Be kind to one another.”

That’s why it was so shocking when DeGeneres revealed to The New York Times in December 2018 that she may walk away from her feel-good ratings juggernaut — and that she almost didn’t sign on the dotted line to renew the show.

Why anyone would choose to leave the land of “Five-Second Rule” or quit making kids on YouTube famous or stop scaring the crap out celebrities is surprising, to say the least, but DeGeneres has her reasons. Let’s take a look at why she might call it quits.

She wasn’t being herself

Perhaps the biggest reason why Ellen DeGeneres doesn’t want to do daytime TV anymore is because she doesn’t feel like she’s being her most authentic self. The comedienne, who’s famous for her clean, happy material on her talk show, explained to The New York Times, “The talk show is me, but I’m also playing a character of a talk-show host. There’s a tiny, tiny bit of difference.”

DeGeneres’ pal, Tig Notaro, added, “Being trapped in the world of being asked to dance and expected to be nice, it’s real. I’m sure there’s people who think she’s kidding. Or can’t have a bad day. But she does. It’s an interesting pickle she’s in.” The hostess’ wife, actress Portia De Rossi also noted, “She’s just a bit more complicated than she appears on the show. There’s more range of emotion.”

DeGeneres also said that her audience expects her, to a degree, to be in character 24/7, which isn’t easy for any normal, healthy human being. “There’s been times someone wants a picture, and while I’m doing a selfie, they’re like: ‘You’re not dancing!’ Of course I’m not dancing,” she said. “I’m walking down the street.”

Her marriage may have been suffering

Ellen DeGeneres’ wife, Portia de Rossi, and her brother, comedian Vance DeGeneres, are at odds over Ellen staying on for more seasons of The Ellen DeGeneres Show. “I just think she’s such a brilliant actress and stand-up that it doesn’t have to be this talk show for her creativity,” de Rossi told The New York Times. “I don’t see the end of her show as her career ending.”

It’s caused a bit of bristling in conversations with Vance, Ellen admitted of de Portia’s urging her to exit daytime television. “She gets mad when my brother tells me I can’t stop.”

Sources told Life & Style that Ellen and Portia have been overheard arguing on the set of the show, which reportedly shook Ellen enough to go to couples’ therapy with her wife. The pair reportedly had issues for a while over trying to maintain a healthy work/life balance. “It’s all about spending quality time together, but still giving each other space during the workday,” an insider told the tab. “Portia and Ellen are trying to be more like most busy working couples, who have to make time to see each other.”

Other stars are already gunning for her job

Ellen DeGeneres hasn’t even announced whether or not she’s definitely retiring yet, but other stars are already jumping at the chance to replace her on television. One of those people is A.C. Slater-turned-professional personality Mario Lopez, who recently filled in for DeGeneres while she was on vacation — and who Radar Online reports is so thirsty for the gig that he may need an I.V. for dehydration.

“He was allowed to sit in the hot seat and it went very well,” a source said. “Now Mario’s focused on impressing everyone at the show. He’s not an obvious choice to take over from Ellen, but Mario has more than enough experience, and he’s desperate to move on to something bigger than Extra.”

It wouldn’t be the first time Lopez job-hunted while at Extra: Sources told Page Six in 2016 that he was eager to take Michael Strahan’s spot on what’s now Live! With Kelly And Ryan. He faces some serious competition from Kelly Clarkson, The Blast reports. Clarkson was announced to have her own talk show premiering in fall 2019 on NBC stations as “a lead-in” to The Ellen DeGeneres Show, and sources told the site that Clarkson is “being groomed to take over” DeGeneres’ time slot once the relatable blonde does, in fact, retire.

Jimmy Fallon stole some of her thunder

Ellen DeGeneres may want to leave daytime because a certain nighttime host keeps jacking her on-air style. The New York Times pointed out that long before Jimmy Fallon had games on The Tonight Show, DeGeneres had them on her daytime talk show — and now Fallon’s show has become widely known for playing games with guests. “I’m flattered that he’s taken stuff. He said he was going to steal everything, so it’s fine.”

It’s important to note that DeGeneres may be sincere when she said “it’s fine,” as she and Fallon are longtime friends. In fact, she even lip-sync battled him in 2015 and referred to him as her friend when expressing condolences for the loss of his mother in 2017. She also reportedly contacted the NYT reporter to clarify that she wasn’t bashing Fallon at all.

And if nothing else, DeGeneres still hosts a game show in addition to The Ellen DeGeneres Show: She also hosts Ellen’s Game Of Games since December 2017, and the show recently aired a holiday spectacular in December 2018.

She hates tabloid tales about her being mean behind the scenes

Ellen DeGeneres has developed a bit of a reputation of being not nearly as nice in real life, even on the set of The Ellen DeGeneres Show, as she is when she’s in front of a camera. A source told Radar Online in December 2017, “When the cameras aren’t rolling, she treats staffers as if they are her peasants!” The insider explained that DeGeneres allegedly “picks and chooses people to be nice to when it’s to her advantage … She’ll invite some staffers to fun outings and purposely exclude others to create tension, jealousy and hurt feelings.”

The source added that DeGeneres once blew a gasket because no one told her about a loose thread on her slacks, adding, “Staffers never know what she’ll go off on, or who she’ll target. It’s like walking on eggshells.” Sources also told The National Enquirer in March 2017 that despite being a sweetie pie on screen, DeGeneres was “an absolute ice queen” to her staff.

Those stories don’t sit well with DeGeneres. She lamented to The New York Times “That bugs me if someone is saying that because it’s an outright lie. The first day I said: ‘The one thing I want is everyone here to be happy and proud of where they work, and if not, don’t work here.’ No one is going to raise their voice or not be grateful. That’s the rule to this day.”

Ellen DeGeneres was eager to get back to her stand-up comedy roots, which she’s hoping to do with Relatable, her Netflix special premiering Dec. 18, 2018. She explained to fellow comedian-turned-talk show host Jimmy Kimmel that when she initially walked away from stand-up comedy, “I was done with it, you know? I did it for like 20 years. … I used to joke all the time, when I was touring, ‘Someday, you’ll all come to me.’ And then, now they do. So I just stopped going out.”

She explained of road life, “It was my life for 20 years, and it was touring, and it was really hard because it was the beginning, and … no one knows who you are … So when I was done with it, I was done. And then it had been 15 years and I decided I miss it and [thought] it would be a challenge to do another one, and I just decided to start writing. And I’m really happy with it.”

DeGeneres pal and fellow comedian Tig Notaro quipped to The New York Times of a particular element of DeGeneres’ return to the stand-up stage, “[It was] a decades-long payoff.”

She doesn’t seem thrilled with her celeb guests anymore

The biggest part of The Ellen DeGeneres Show, aside from DeGeneres herself, is the A-list celebrity guest list — but DeGeneres seems disillusioned in recent years with the stars who’ve visited her show.

The Bachelor castoff Corinne Olympios said her 2017 interview with DeGeneres — in which DeGeneres commented on Olympios’ use of the word “nanny” and frequent nudity on The Bachelor — made her “uncomfortable.” Olympios explained to The Morning Breath podcast (via Life & Style), “She’s very aggressive, she was very cold when I saw her before the show, which I don’t think I was supposed to, because everybody got very nervous when we bumped into each other and you could tell they were like ‘Oh, s**t.'”

Aside from Bachelor rejects, there are a slew of actual celebrities who don’t get along with DeGeneres, including Liza Minnelli, who TMZ reported got miffed after DeGeneres — a longtime supporter of the LGBTQ community — referred to Minnelli as a drag queen at the 2014 Oscars. Viewers have also noticed DeGeneres’ seemingly off-putting and impatient behavior with guests recently, notably in her 2017 segments with Jennifer Lopez, Katy Perry and the adorable kids from Stranger Things.

Is she being mean to audience members?

Ellen DeGeneres has a loyal audience, but their loyalty may wane, as she’s upset quite a few plebeians in recent years.

In June 2016, a woman named Titi Pierce sued DeGeneres for mocking her name on The Ellen DeGeneres Show, TMZ reported. Pierce, a Georgia real estate salesperson, alleged that DeGeneres not only hurt her reputation, but that she received the news that she was a national laughing stock when “she was on her way to a funeral.” The suit was eventually tossed.

A year later, DeGeneres set up hidden cameras to catch her audience members stealing merchandise after being specifically instructed to only take one item. While it was ostensibly in good fun (and people shouldn’t steal), the audience members who got busted, especially one woman who was forced to then sit in “Ellen jail” and get lectured on being a good person, looked like they’d been set up to be shamed.

The shady side of Ariana Grande