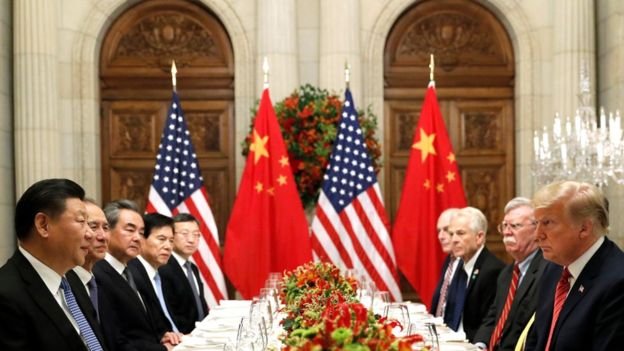 China has reportedly proposed cutting tariffs on US-made cars to 15%, the same tax levied on car imports from other countries.

Bloomberg reported that China’s cabinet will review the plans, which would undo the 40% import duty China imposed on US cars this summer.

The proposal, the timing of which remains uncertain, comes as the two countries restart trade talks.

US President Donald Trump said earlier this month China would cut the tariffs.

However the claim has not yet been confirmed by Chinese officials, sowing confusion.

Tuesday’s reports in US media, which were based on anonymous sources including a car executive briefed on the proposal, said China outlined the plan on a recent telephone call between top trade negotiators from the two countries.

Bloomberg, which cited “people familiar with the matter”, said the step was not finalized and could still change.

The office of the US Trade Representative, which is leading the discussions, did not respond to a BBC request for comment.

In a tweet, Mr Trump said the two sides were having “very productive conversations”.

China’s commerce ministry confirmed that the two sides had spoken. In a statement it said the conversation concerned “pushing forward the timetable and road map for the next stage of economic and trade consultations work.”

Very productive conversations going on with China! Watch for some important announcements!

Shares in car companies, including BMW, rose on the reports.

The back-and-forth is the latest in a trade tow triggered by US claims that China engages in “unfair” trade practices, such as theft of intellectual property.

The dispute has prompted the US and China to impose new tariffs on billions of dollars worth of annual trade this year, measures that have contributed to economic worries in both countries.

The two sides, led by Mr Trump and President Xi Jinping, recently met in Argentina, where they agreed to a 90-day halt to any new tariffs.

US officials later said they wanted to see China move to reduce the car tariffs “immediately” as a sign that negotiations would proceed in good faith.

Analysts remain sceptical that the two sides will be able to reach a resolution of the underlying issues by 1 March.

Those doubts increased after the recent arrest of a high-ranking Huawei official in Canada at the request of the US, which worsened relations between the two countries.

White House officials have maintained that the two matters are separate, but apparent agreements have faltered before.

In May, after talks in Washington, the US agreed to hold off on tariff threats, while China said it would reduce the import duty on foreign cars from 25% to 15%.

However that deal fell apart within weeks, after Mr Trump decided to move ahead with tariffs.

In retaliation, China raised the duty on US car imports to 40%, though it proceeded with the lower rate on imports from other countries.