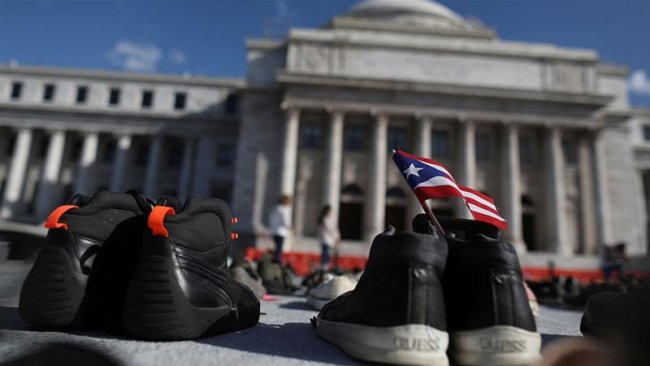 Nearly 3,000 people died in Puerto Rico in the six months after Hurricane Maria as a result of the storm, with the elderly and improverished most affected, according to a long-awaited independent study ordered by the US territory’s government.

The findings contrast sharply with the official death toll of 64, and are about double the government’s previous interim estimate of 1,400 deaths.

“The results of our epidemiological study suggest that, tragically, Hurricane Maria led to a large number of excess deaths throughout the island,” said principal investigator Carlos Santos-Burgoa, a professor of global health at George Washington University.

“Certain groups – those in lower income areas and the elderly – faced the highest risk.”

Reasearchers with the Milken Institute School of Public Health at George Washington University tracked excess deaths related to Hurricane Maria from September 2017 to February 2018, and found the toll of 2,975 deaths was “22 percent higher than the number of deaths that would have been expected during that period in a year without the storm”.

“We are hopeful that the government will accept this as an official death toll,” said Lynn Goldman, the dean of the Milken Institute.

Earlier this month, Puerto Rican officials quietly acknowledged that Hurricane Maria likely killed more than 1,400 people in a draft report to Congrees that outlined the government’s reconstruction plan. At the time, the New York Times reported that the Puerto Rican government said it would wait to update its official tally until after the George Washington University study was released.

The government has not commented on findings of Tuesday’s report, which is based on an analysis of death certificates and other mortality data for six months from September 2017 through February 2018.

Researchers estimated the excess deaths with the help of mathematical modeling that compared post-hurricane deaths to the expected number based on historical patterns, and adjusted for age, sex and migration from the island.

The team also identified flaws in the system that may have led to an under-reporting of deaths previously, including lack of communication, and poor training for doctors on how to certify deaths in disasters.

Hurricane Maria pummeled Puerto Rico in September 2017, wreaking widespread devastation. In the draft report to Congress earlier this month, the territory detailed its reconstruction plan, which is estimated to cost $139bn, 47 percent more than the bankrupt US commonwealth requested in November.

A study by Harvard University earlier this year estimated around 4,600 had died in the three months following the storm.

The findings of that report blamed most deaths after Hurricane Maria on interruptions in medical care due to power outages and blocked or washed out roads.

The government of Puerto Rico stopped publicly sharing its data on hurricane deaths in December 2017.