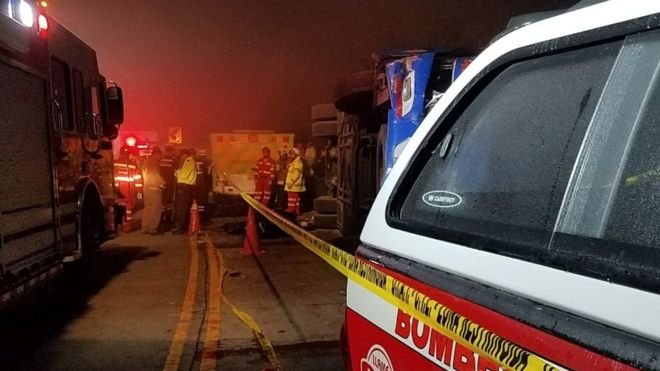 At least 12 fans of Ecuadorean football team Barcelona SC have been killed and 30 injured when the bus they were travelling in overturned.

The fans were returning from an away game in Cuenca where the team from Guayaquil had drawn against Deportivo Cuenca.

It is not yet clear what caused the bus to overturn on the road.

Barcelona SC is one of the most popular teams in the country with a passionate fan base.

The team’s chairman, José Cevallos, said on Twitter that he had received news of the accident “with much pain”.

He also said that a funeral chapel would be set up in the team’s stadium to honour those who had died.

Ecuador’s football association as well as football clubs across Ecuador expressed their condolences to Barcelona SC.

The accident happened on the road leading from Cuenca to the town of Molleturo just after 16:00 local time (21:00 GMT).

Officials from Ecuador’s transport commission are at the scene of the accident. They said that the bus had all the necessary permits and had passed a safety inspection in February.

Eyewitnesses told a a local channel the driver had been trying to overtake another vehicle just before the accident happened.

An average of seven people are killed on Ecuador’s roads every day, according to road safety group Justicia Vial.

Official figures suggest 96% of accidents in Ecuador are caused by human error.