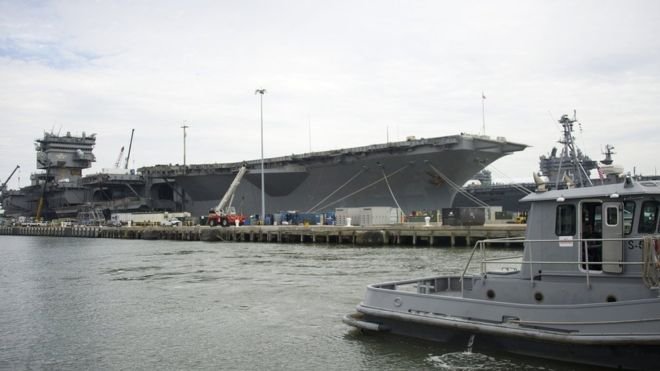 The US Navy has said it will re-establish its Second Fleet, as Russia becomes more assertive.

Chief of Naval Operations Adm John Richardson said the fleet, disbanded in 2011, would oversee forces on the US East Coast and North Atlantic.

He said the National Defense Strategy, published earlier this year, made it clear that the era of great power competition had returned.

The strategy makes countering Russia and China a priority.

The fleet, which was disbanded for cost-saving and structural reasons, will be based in its previous home – Norfolk, Virginia.

“Our National Defense Strategy makes clear that we’re back in an era of great power competition as the security environment continues to grow more challenging and complex,” Adm Richardson said.

“That’s why today, we’re standing up Second Fleet to address these changes, particularly in the north Atlantic.”

Norfolk has also been proposed as a host for the new Nato Joint Force Command for the Atlantic.

Nato officials say Russia has increased naval patrols in the Baltic Sea, the North Atlantic and the Arctic, and its submarine activity is at its highest level since the Cold War.