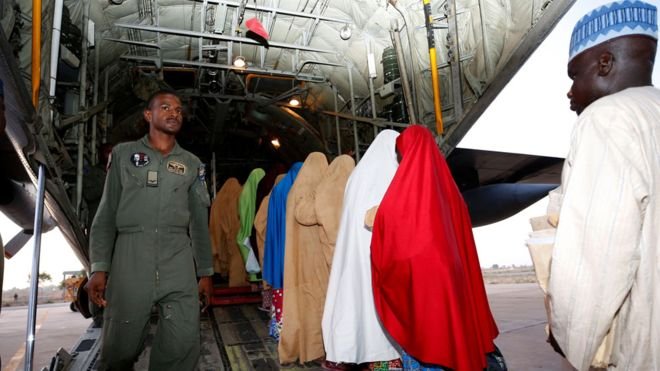 The father of a schoolgirl kidnapped by Boko Haram in Nigeria has described the pain of losing his daughter again.

His daughter was among several others taken to the capital, Abuja, to meet President Muhammadu Buhari after their release from a month in captivity.

The father told the BBC that he had only been able to see his daughter at hospital for a few minutes.

“Even though I assured her I wouldn’t leave her there, we were all asked to leave and they took them away.”

Of the 110 girls seized from their school in February by Islamist militants, 104 girls were released on Wednesday. Five reportedly died during their captivity while one girl, a Christian who refused to convert to Islam, is still being held hostage.

The government denies claims that Boko Haram was paid a ransom for the girls’ freedom.

Two other people – a boy and another girl from Dapchi – were freed at the same time, the government says.

The father, whose name we are withholding to preserve his daughter’s anonymity, told the BBC’s Newsday programme: “The painful thing is you don’t seem to have a right over your daughter.”

However, he said he understood she was safe in the hands of the government.

The freed girls are expected to undergo some medical screening and debriefing before meeting President Buhari.

The president previously said that his government had chosen to negotiate their release rather than use military force.

His administration has been under pressure to resolve the 19 February abduction, which revived painful memories of the 2014 kidnapping of 276 girls from the town of Chibok.

Former Nigerian President Goodluck Jonathan was criticised for his handling of the abductions in Chibok, some 275km (170 miles) south-east of Dapchi.

The abductions gained worldwide attention through a campaign spearheaded by former US first lady Michelle Obama.

The freed Chibok girls were also immediately taken to meet then President Jonathan after their release. However, more than 100 girls from Chibok still remain missing.