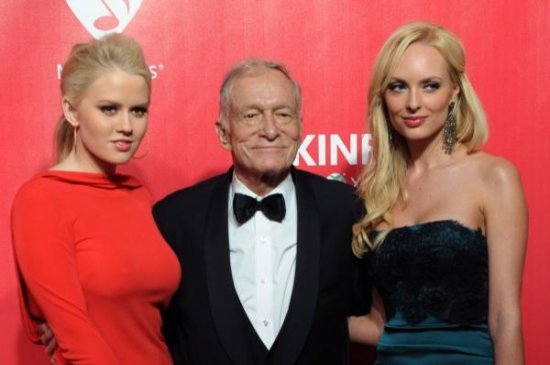 Hugh Hefner, the businessman who launched Playboy magazine and its subsequent business empire, has died of natural causes at the age of 91, the company has confirmed.

Playboy announced his death Wednesday in a post to its Twitter account, along with a photo of Hefner and a quote of his: “Life is too short to be living somebody else’s dream.”

Hefner was born in Chicago in 1926 and served in the Army in the 1940s before starting Playboy, whose first issue in December 1953 included photos of actress Marilyn Monroe, according to Hefner’s biography on the website for the Hugh M. Hefner Foundation. The organization describes itself as a promoter of civil rights and civil liberties since 1964.

Playboy, featuring nude women on its pages alongside pieces of literature and noted interviews of dignitaries that included Apple founder Steve Jobs, musician John Lennon and President Jimmy Carter, rapidly grew into a public company boasting a distribution list of 7 million monthly copies and ownership of 23 clubs resorts, hotels and casinos by 1971.

“My father lived an exceptional and impactful life as a media and cultural pioneer and a leading voice behind some of the most significant social and cultural movements of our time in advocating free speech, civil rights and sexual freedom,” Hefner’s son Cooper, Chief Creative Officer of Playboy Enterprises, said in a statement obtained by Entertainment Weekly.

But Hefner and Playboy were not without their critics, who claimed the magazine and its surrounding culture promoted a sexist objectification of women. They included activist Gloria Steinem, who went undercover as a Playboy bunny in the 1960s and wrote about the experience for Show Magazine.

Ex-girlfriend Holly Madison joined Hefner’s critics in recent years after publishing a memoir titled Down the Rabbit Hole in 2015. In the book, Madison wrote that Hefner offered her drugs, pitted his girlfriends against each other and tried to bribe her with money in his will.

More broadly responding to criticism in an 2003 interview with NPR, Hefner said he thought Playboy‘s detractors were puritanical.

“I think you ought to talk to the women who’ve been in the magazine and see how they feel about that,” Hefner said. “I mean, what is more Puritan than somebody who has a strong opinion about somebody else’s life and who disapproves of it because somehow or other it’s not their particular way?”